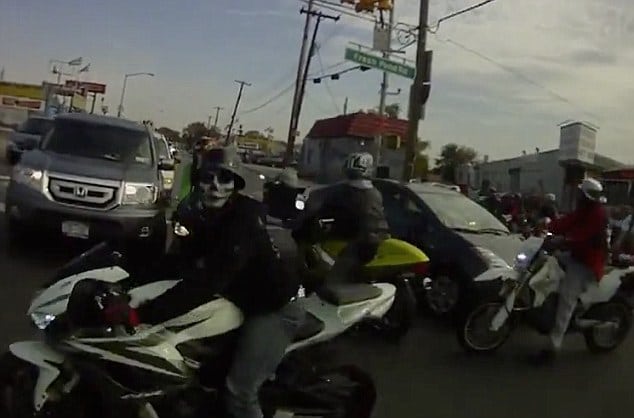 Wojciech Braszczok lawyer says he will be exonerated

A new disturbing video has emerged said to be shot the day of last weekend’s biker fracas but never until now publicly released.

The video purportedly shot on the same day goes on to depict chilling scenes of bikers attacking car drivers, riding through red lights and even speeding along the sidewalk.

The latest footage is reportedly said to be uploaded by the same motorcyclist, Kevin Bresloff who posted the clip of driver Alexian Lien being beaten by an angry group of riders.

In the latest video to emerge, the gang are filmed on a helmet camera speeding along the sidewalk, seemingly not caring if anyone was walking nearby.

The three-minute clip also shows them riding through red lights, accelerating on the wrong side of the road and speeding over a forecourt in Ridgewood, New York.

In scenes similar to that of the Alexian Lien video, a group of riders is also seen getting into an altercation with a car driver.

About four riders surround the Prius and hit the window and wing mirror before moving on.

It has not been confirmed whether the riders from the two videos are the same group, but in both motorcyclists are seen wearing biker jackets with diamond designs on the back.

The UK’s dailymail goes on to note that Street FX Motorsport & Graphics, which first highlighted the video, claim it was uploaded to the same YouTube account as the Lien video.

However, it was later removed after attracting criticism.

Told the website: ‘We have all no doubt seen the Range Rover episode that we posted a few days back…What the bikers DIDN’T want you to see, is that they make a habit of these deliberate intimidation techniques year after year.’

As of yet authorities have not vouched if the bikers seen in the below video were part of the same gang that went on to have an altercation with Lien last Sunday or a different group of riders, which of course is hardly the most sobering thought either…

No word as of yet why the video was taken off youtube initially. Can anyone guess why…?