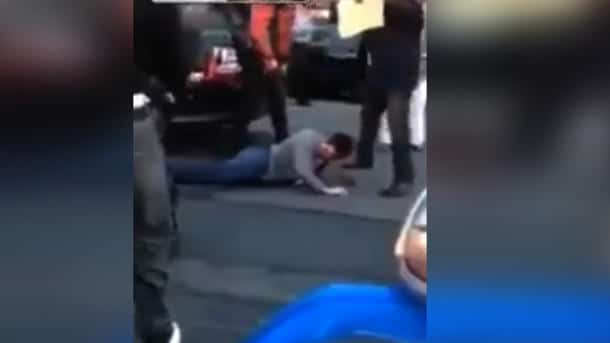 Clint Caldwell of Brooklyn has gone on to be the sixth individual arrested and charged for the brutal assault of motorist Alexian Lien and his family.

To date Clint Caldwell, 32 years old, has been charged with  gang assault, assault, and criminal mischief, goes on to tell ABC.

Abc go on to tell that Caldwell was not caught on the six-minute video that was posted on YouTube. That said it is believed Clint Caldwell allegedly helped pull Lien out of the SUV and then assaulted him.

The epochtimes has gone on to tell if it is also unclear if Clint Caldwell has a lawyer. The outlet goes on to note that there is no phone listed for him at his Brooklyn address.

The arrest of Caldwell comes after 29-year-old Craig Wright became the fourth motorcyclist arraigned in connection with this incident. He pleaded not guilty to charges of assault, gang assault and unlawful imprisonment and was ordered held on $100,000 cash bail/$150,000 bond.

Also now being arrested is undercover cop, Wojciech Braszcok whose participation as an off duty police officer presents the greatest challenge to local authorities and portends a capitulation of moral and ethical standards with the force. The cop had earlier told he had only seen the tail end of the beating but new video has gone on to show the cop smashing the back window of Alexian Lien’s window, kicking the side of his SUV twice before finally riding off.