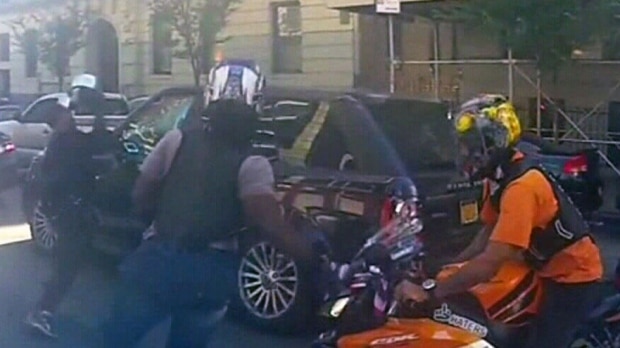 Debate has ensued as to whether cops involved in the Alexien Lien chase and beating should have intervened. With mounting disgust as to the violence that went on as new images have come to light, the public is beginning to ask whether undercover cops failed in their duty to protect and serve the community.

To date there have been reports that up to five undercover cops were riding with the gang, including one undercover narcotics cop who has since been suspended and put on desk duty for failing to tell superiors until four days later of his involvement. Which of course might also be a catch way to appease the public’s appetite for accountability.

Went on to offer attorney Phil Karasyk with the Detectives’ Endowment Association for one of the undercover cops:

‘He thought there had been a hit-and-run, He later saw the bikers attacking the SUV but didn’t see the motorist pulled from the vehicle and beaten,’

Went on to say Karasyk:

‘The detective had no gun or badge with him, was conscious of cases where officers blew cover only to be suspended or dismissed for doing so and decided he had no other option, so he drove away.’

“The question is: should they have identified themselves or whatever? I don’t know what the facts are and I can’t prejudge it,”

“I think we all, no matter what your job is, we have an obligation to help one another. And if you see someone getting beaten up, let’s go jump in and stop the fight. Having said that, if someone has a gun and a fight, most people would walk or run away very quickly.”

Nevertheless many commentators on the web have gone on to express outrage, disgust and dismay that undercover cops failed to intercede let alone call fellow cops, although in his defense, the suspended narcotics cop went on to argue that one of the bikers had called cops and he was afraid to put himself at risk by revealing his real identity. Then there were those commentators who went on to also take a more nuanced appreciation of matters:

As many as 5 police officers riding with a pack of lawless, violent, renegade motorcyclists. Seems they are more loyal to the gang than to their uniforms and code or ethics. They would stand by and watch a citizen, his wife and child get brutally assaulted and not report it or even step in to stop the assault. Just a couple of rouge officers? Mrs. Lien made 4 frantic phone calls to 911 with no response. Seems an average citizen assaulted by out of control bikers is very low on NYPDs priorities. Had Mr. Lien been a cop or fireman there would have been 100 of New Yorks finest there in seconds. Yes, seconds. They only arrive after the crime to take reports. They will in-fact go to great lengths to protect their own. Citizens your on your own. Get out of New York. Its really a cesspool. The criminals have won.

There will be plenty of riders in the group who have nothing to answer for as they had nothing to do with the initial incident or the subsequent chase and assault. People who now want to thoughtlessly chase and persecute anyone within one or two degrees of separation to the incident are as mindless as those who chased the SUV….. its just another kind of thoughtless mob mentality.

One could make an ethical case that undercover cops should have intervened as their were lives in danger but then one also has to raise logistical questions. What would have transpired to the lives of the officer if they got involved, the individuals being affected and for that matter why were there 5 undercover cops doing amongst the ruckus that day? Were they already investigating something, part of an inside job, also participating in illicit behavior or somehow aligned with the bikers?

Then again it could have been a situation of being outnumbered, outgunned, no badge and tending to a no win mob mentality…

Officers have a moral obligation to overcome their personal fear of bodily harm to do the right thing. He could have at least spoke up in word. A shameful reflection upon the NYPD in my opinion.