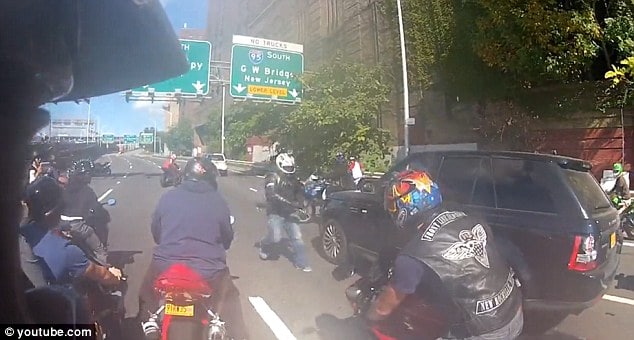 A New York Range Rover driver has been beaten up by a motorcycle pack after plowing through the pack who were participating in an annual bike ride called the Hollywood Block Party.

The beating and ensuing high speed car chase came after the driver inadvertently went on to knock one of the bikers whilst negotiating traffic and again after taking off fearing a physical altercation.

Fearing for the immediate safety of his wife and 5 year child, the Ranger Rove driver went on to plow through the motorcycle throng making his getaway before eventually being ensnared by traffic. All the while during the chase, a disturbing cat and mouse game proceeds to be played out, all whilst being filmed by a chasing motorcyclist’s video camera perched on his helmet.

As the video plays out, a convoy of  motorcyclists give chase. At roughly the 4:50 mark, the Range Rover driver slows to a stop, as one of the bikers runs up to the vehicle and manages to pull open the door. The driver escapes again, but is finally cornered after leaving the highway and ensnared in local traffic.

From there the video shows chasing bikers alight and begin smashing the driver’s window as well as the rear door window, where the five year old child sat whilst beating the driver to the horror of his wife and child. Authorities later went on to report that the man suffered slash marks to his face and body whilst the vehicle’s four tires were all slashed as well.

At the initial time of the incident, the driver went on to tell that he had become ensnared in a large convoy of motorcyclists, some of whom he claimed had  been driving ‘erratically’ before ‘accidentally colliding with one of the motorists.

Video of the incident went on to mysteriously surface this morning after purportedly being posted by a biker, under the name GIXXARDR on Liveleaks, from Melbourne, Australia. GIXXARD goes on to claim a biker was killed, which police have said is not true.

Since the video’s posting commentators have piled on to respond with an overwhelming number of respondents taking the Range Rove driver’s side.

Told various users: ‘I would do exactly the same thing. They’re intimidating him and he’s probably fearing for his life.’

Another user goes on to offer the driver was simply acting in ‘self defense,’

‘Did you see the biker break (sic) check him in the beginning. This poor guy was running for his life from the start.’

Another user goes on to also offer it was ‘justifiable’: ‘Only a fool would stick around to be pulled out of his car and lynched by 100 bikers.’

Commented others on the web:

I’m not defending the actions of the diver of the SUV by any means, but these giant packs of idiots on bikes are a danger and a menace. They are constantly hauling ass through my neigborhood in The Bronx with ZERO regard for anyone. They run stop signs, stop lights, speed and act like jackasses. I’m just waiting for the day when one of these morons kills a kid or some random person just trying to go about their normal lives.

I think cellphones are tailor-made for situations such as this. If the RR driver felt threatened, he could have called the cops. I guarantee the offending motorists would ride away in a heartbeat once they hear sirens approaching. Either way, this appears to be a case where everyone was on their worst behavior.

Authorities have since gone on to tell the Ranger Rove driver was taken to hospital where he was treated for lacerations to his face and body. No other reported injuries were made nor have there been any arrests as authorities continue to investigate the video.