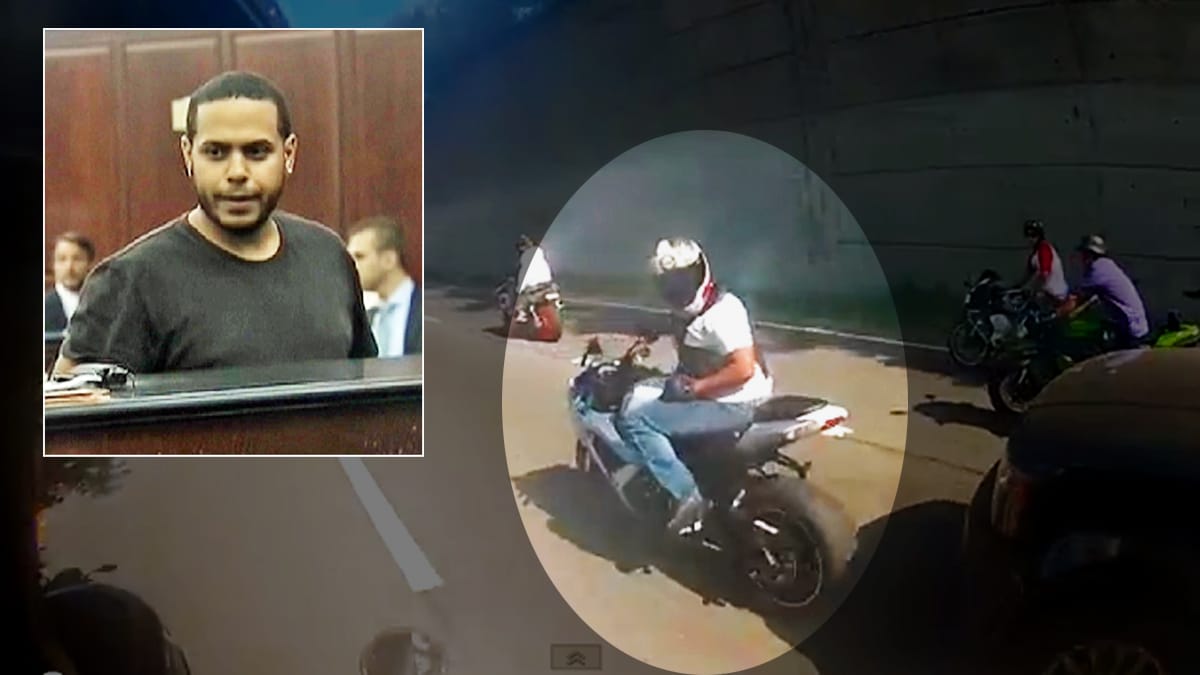 Christopher Cruz in an exclusive interview has come out to tell that he believes he and fellow bikers involved in last weekend’s disturbing Alexian Lien cat and mouse car chase has been unfairly portrayed by the media.

Christopher Cruz who has since gone on to be charged with reckless endangerment after being said to initiate last weekend’s hostilities went on to tell that he tries to ‘stay away from trouble as much as possible.’

In his exclusive with ABC, the biker goes on to tell that his life has since turned ‘upside down,’ and that he is grappling with the enormity of what happened last weekend. Cruz who fears he may face jail went on to say the following:

“I was trying to get his attention to make sure he sees me before I pulled in front of him,”

“He never looked back at me.”

The video then shows Cruz crossing into the middle lane, looking back over both shoulders and then slowing down, resulting in the collision with Lien’s SUV.

“[It was] never my intention to make him stop,”

“I didn’t think I was doing anything wrong with just turning into another lane. The other bikes are going as slow as I am.”

“I was looking over my shoulder to see where my friends were,”

“I wanted them to pull in front so I could follow them. I didn’t brake but when I looked over my shoulder, my hand came off the throttle a little, but the driver didn’t slow down at all and bumped me.”

Cruz told ABC News’ Harris that both he and Lien stopped and he approached Lien for an explanation.

“He looked straight ahead and never made eye contact with me,”

“So I just went back to my bike and when I was getting on he took off.”

Cruz’s lawyer went on to offer that his client has since been made an example of to satisfy public anger.

With public wrath high, many have gone on to condemn the bikers with many holding the view that the bikers initiated last weekend’s aggression.

Indeed many commentators have since gone on to argue that there should be more control of bikers and watchful presence when they choose to ride out in packs as they are said to often behave in predatory manner.

Nevertheless in an interview last week, with Peter Douglas, president of a group of more than a dozen bikers based in East Orang, NJ, known as the Front Line Soldiers went on to fault Alexian Lien for not having remained stationary after initially hitting Christopher Cruz.

Told Douglas: “They paint us all as bad, rogue people,”

“just because one ride goes wrong and someone gets hurt.”

Reflected a variety of commentators on the web:

You are the aggressor because you were part of a pack of animals that were trying to get this man off of a public road so you and your man-children knuckle-draggers could play on a highway.

The only thing the guy in the Rover did wrong was fail to back up.

Me? I would have slowed down, or stopped if need be, and enjoyed the spectacle with my family, all those bikes buzzing around, doing tricks, being all badass. What little kid (or self-respecting grown-up) wouldn’t have thought that was cool? What I wouldn’t have done: been SO PISSED THAT I CAN’T DRIVE MY ROVER WHEN I WANT TO DRIVE MY ROVER that I paralyzed somebody for life.

I believe this began as some sort of road rage incident where Lien was mad that scores of asshole bikers were on the road and maybe honked at them or flipped someone off and it escalated from there. The bikers definitely bare the brunt of the blame but I don’t think Lien was an angel before the video began either.

There is something about being in a car that makes people act very differently than they would if they were just on the sidewalk.