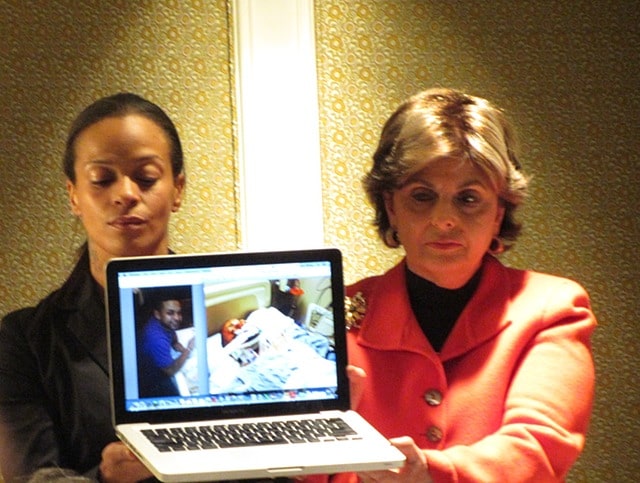 Gloria Allred went on to hold a press conference this afternoon where she went on to tell that Edwin Mieses was simply a devoted family man trying to defuse a volatile situation and the real innocent victim and not the scum the press had made him out to be.

Offered the celebrity lawyer: “To top it off he has been pilloried in the press and in the public eye as though he deserved to be run over in the street.”

“Most importantly, Edwin is a human being and he has a heart. He had no malice or ill intentions towards Mr. Lien or his family whatsoever. When he saw Mr. Lien’s Range Rover stopped on the road. He pulled his bike over to the side, and walked over to where the accident had occurred to see what had happened and then tried to encourage people to move and keep riding.”

Interestingly and perhaps acutely aware of the heated public scorn towards the bikers, Allred went on to offer that she was not justifying the beating of Alexian Lien, but that too she went on to insist had nothing to do with her client, Edwin Mieses, who is now permanently paralyzed.

“Edwin Mieses and his family deplore what happened to the driver of the SUV,”

“However, let us not lose sight of the fact that Mr. Mieses had done nothing to Mr. Lien,”

“We don’t think our client should have been run over and crushed.”

Also present at the conference was Edwin Mieses’ partner  as she was introduced (it seems the couple are not married after all), Dayana Mejia, who went on to tell that Mieses is an adoring father to the couple’s two children.

“Edwin is as devoted a family man as they come. He has been a wonderful, loving partner to me for almost 17 years. He is an adoring and caring father to our two children. Until he was run over by this SUV, he has been there for our two children every single day – literally. Edwin picks our children up from school every day. He spends the afternoon with them every day. He takes them to their activities. He helps them with their homework. He goes to their parent-teacher conferences at school. He is the best father I know,”

Gloria Allred as of this afternoon has yet to disclose whether she will actually seek to sue against Alexian Lien as she continues assessing the situation.