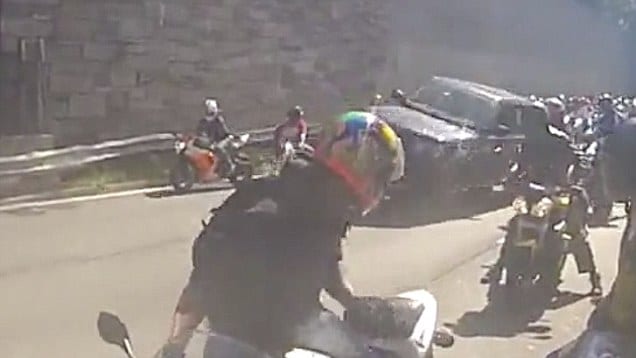 Kevin Bresloff, the biker who went on to capture the harrowing chase and eventual beating of motorist Alexian Lien has now gone on to respond to allegations that he tampered with the video he took which has since gone viral and shocked the nation.

In responding to criticism that Kevin Bresloff purposefully chose not to film the unfolding beating so as not to incriminate fellow bikers, Bresloff’s attorney, Andrew Vecere went on to tell the following:

“We absolutely deny that allegation,”

“We categorically deny that he in any way tampered with the video. It’s a shame, but that’s when it died. The battery just stopped working, there is no more footage. ”

In a statement to “CBS This Morning,” Kevin Bresloff went on to tell the following:

“Based upon the sole fact that I ride a motorcycle, the public has decided that I am a thug or a gang member. This is simply not true. I was a spectator of these unfortunate events that occurred.”

Vecere has since offered his client is not in a gang and is not affiliated with a motorcycle club. He said Kevin Bresloff was simply documenting the incident.

“He is not at this point being looked as having done anything wrong,”

“He is simply a motorcycle enthusiast who happens to have had a helmet camera on,”

“I believe he thought that he was still rolling [film on the attack]. From speaking to him, it happened so quickly. In other words, it was shocking, terrifying, never expected this to happen at all. And literally was just documenting it like he documented it from the beginning to the end. In other words, ‘I’m taping it’ originally was, ‘I want the police to see that this man hit a motorcycle, ran over motorcycle riders’.”

Authorities have now gone on to tell that Kevin Bresloff is not facing any charges. He is being considered a witness. Authorities claim came after they went on to do a vehement search of Bresloff’s home in search of possible further tape that he may have purposefully hidden.

The biker’s interview with CBS comes after Bresloff went on to tell over the weekend that he has now received death threats over the video he took.