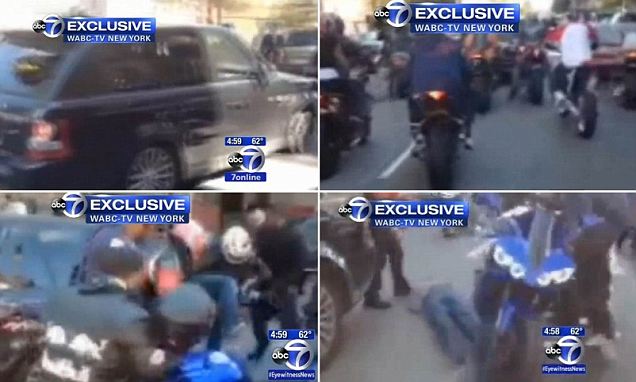 Alexian Lien’s uncle has ordered a crackdown on all bikers.

Outrage is being expressed with the release of a new dramatic Alexian Lien video which goes on to show a first hand account of the technology executive being dragged out of his SUV by bikers and senselessly beaten whilst onlookers look on in disbelief.

The new 51 second video obtained by ABC Eyewitness News is said to have been used by police in identifying the nine motorcyclists accused of assaulting driver Alexian Lien.

In the video the voice of one of the bikers can be heard as they start screaming at Alexian Lien: “What the f**k is wrong with you?”

From there the video appears to show the bikers beating Lien with their helmets and stomping on him. At one point Lien is shown lying on the ground, not moving.

Reactions on the web this morning have been one of outrage:

‘They should bring hanging back for these guys….. I would stand right up front and applaud each time one of them fell through the trap door.’

‘such a sad sight to see. you can even hear the wife scream through the open door and broken windows. and all this for what? to brag about it on twitter? street cred?

‘I do not want these thugs beaten, shot, run over or anything like that. I want what should have happened to them a long time ago. I want them to be prosecuted, a jury of people who really listen to the facts and ignore the racism that they will try to suggest, and then I want a judge to send them to prison for a long time. The problem is many have been arrested many times, gotten off with warnings or just intimidated witnesses and case never pursued.’

‘I agree with everything you’ve said, except one word ~ these were NOT “bikers”. These were thugs with a gang mentality riding crotch rockets. Bikers do have a brotherhood and they do a lot of good in their communities with their different rallies and toy runs for children. You would not see true bikers displaying this kind of behavior. These idiots deserve everything coming their way, I hope justice is swift and harsh ~ especially on the so called undercover detectives that were there and participated in this. Anyone knows that doing a “brake check” in front of a SUV on the highway is NOT going to end well for the bike.. Too bad he wasn’t one of the ones ran over!’