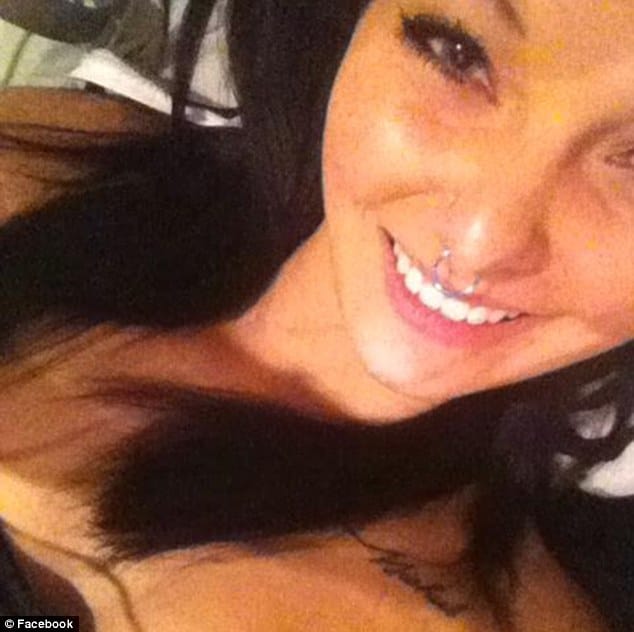 Revelations via the missouritorch are being made that Daisy Coleman, the girl at the center of the Maryville, Missouri rape allegations this past Sunday night attempted suicide.

The attempt on her own life, tells the teenager’s mother, Melinda Coleman, purportedly came after Daisy’s friends went on to write ‘nasty’ messages in recent days to her daughter.

Adding luster to the teen’s sour mood are assertions that hackivist group Anonymous ‘dropping’  Daisy’s case after a recent incident this past Thanksgiving which saw Daisy Coleman being run off the road whilst driving.

Told the mother via an exclusive with the UK’s dailymail late Monday: ‘They didn’t help with anything,’ as she went on to ask on Facebook where Anonymous were now.

‘Now Daisy is being bullied on Facebook to the point that she tried to commit suicide last night and she’s in the hospital and they don’t know if she’s going to be OK.’

Yet despite gaining media attention of her case late last year and bringing awareness of the harassment she and her family had endured, Daisy Coleman has once again tells the teenager’s mother come to be bullied again.

Told Melinda Coleman: ‘She had been pretty good, when we were doing interviews and she felt like people were supporting her and honestly being in bigger cities where people were more open-minded it was helping her a lot.’

‘When we got back here where we had to be quiet, it became really, really hard. For both of us.’

Melinda Coleman goes on to tell that this past Friday night, Daisy attended a party with a friend only to later arrive home to a stream of abuse on her Facebook page from two girls who she previously counted as friends.

‘I had let her go to a party with a friend, she was there for an hour and a half. Then she came home and saw Facebook. (One girl) decided to write something saying “you’re a fake and a phoney,” “you wanted it” and “you’re a slut” because she went to the party,’

Another girl allegedly chimed in, calling Daisy a ‘hypocrite.’ 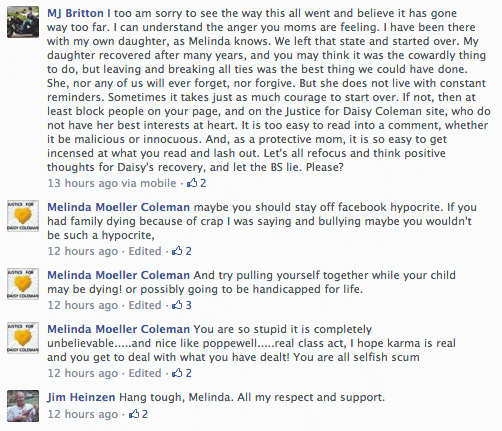 From there, Melinda Coleman went on to attacked the pair online, sparking a heated back-and-forth argument.

‘I was just really angry. I couldn’t believe these girls writing such horrible things to my daughter and defending it,’ she said.

‘She has been through so much and she has done so little. All the other kids are out partying and doing all this stuff and she isn’t, she’s at home with me all the time. The second they see her at a party for five minutes drinking a Redbull it’s all over Facebook and they’re tearing her to smithereens…

‘They just won’t leave her alone, Literally, I have a large grocery bag full of the messages that I’ve printed off Facebook. Full of them. F*** you comments, get out of town, all of it.’ 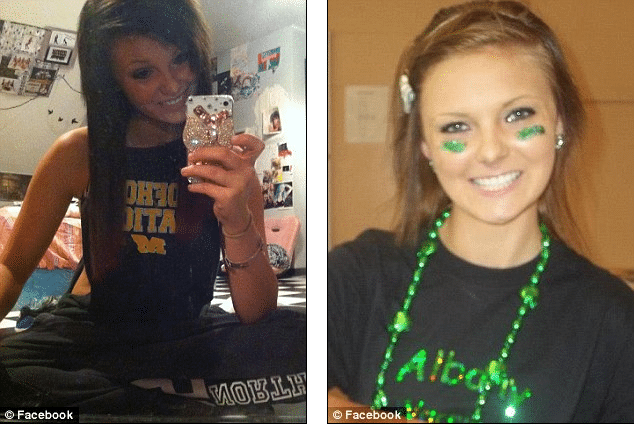 Yet it seems this time things got too much for Daisy. Reiterates the teen’s mother the moment she found out that Daisy tried to kill herself.

‘She was in her room (Sunday night) then she walked into her brother’s room and said she was seeing ghosts and she was freaking out,’

‘She was acting very strangely.’

Melinda Coleman tells she and her sons got Daisy to vomit before rushing her to the hospital where doctors pumped her stomach and put her on an IV.

It’s unclear yet if she’ll suffer permanent damage from the overdose.

Tells Melinda Coleman: ‘She’s not coherent, she makes no sense, she’s like a two year old,’

‘I asked the nurse if she thought she would get better and she said there was no way of telling.’

Melinda Coleman goes on to tell she has chosen in the interim to remain near Maryville to ensure her eldest son continues his scholarship for baseball and her second son, who is a star wrestler, gets a shot at securing a scholarship.

After a big state meet in February, Melinda Coleman plans to uproot and move to Kansas City.

In the interim, Daisy Coleman is waiting to be transferred to a hospital in Kansas City. Which hospital depends on the family’s limited health cover.

‘My insurance only covers a certain amount,’ went on to tell the UK’s dailymail. ‘Now the hummer is destroyed. Quite honestly I don’t have the money so I have to find where she can go that she can be covered.’

In late October, the family won a small victory when special prosecutor Jean Baker was assigned to re-investigate the case.

However, Melinda Coleman is bracing for disappointment as the release of Ms Baker’s report nears.

‘I appreciate so much what she has done but I do think the people before her were covering for themselves and they were lying and cheating and deleting evidence so I think we will learn something but it will not be enough.

‘Unless Anonymous can find it, that evidence will never be found.’

‘I feel pretty helpless,’ Melinda Coleman told. ‘I feel pretty much like there’s no justice, like people can destroy my children, my family, my life and take away my career and my home and there’s nothing I can do about it.’