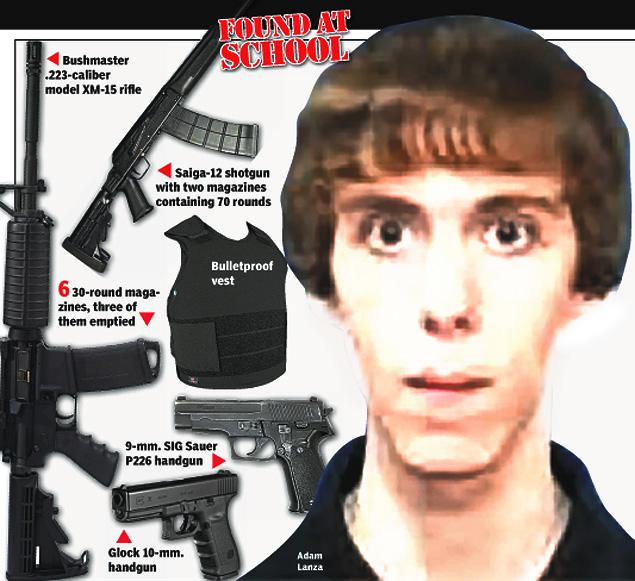 In an ongoing attempt to clarify the state of mind that led to Sandy Hook gunman Adam Lanza exacting his horrific crime late last year which saw the callous deaths of 20 children and 4 adults including his mother, Nancy authorities have uncovered new details that may point to the nature and motivation of the gunman.

Investigators have now been able to reference Adam Lanza to a series of posts and editing within Wikipedia which referenced mass killings, indicating a predilection to such affairs and one wonders the culmination to affect such a horrendous act. Interestingly the posts also go on to show a kind of mastery of knowledge and comfort in a virtual world that Lanza lacked in the real world.

The Courant goes on to detail posts that were made between April 2009 and February 2010, which it suspects were made by the gunman when he was then 17.

Some of the posts question gun laws in Connecticut and include recommendations on the best rifles to buy.

In one post, the person believed to be Lanza, questions whether a ban on semiautomatic pistols will be extended and is advised by other users to contact Connecticut State Police.

He responds: ‘I always prefer asking through proxy when I can avoid speaking to someone directly. I was just wondering if anyone knew because I have a fetish for .32 ACP’.’

Using the same username, the person also corrected details on 12 Wikipedia entries about mass shootings around the world.

They included changing the weapon used in the Dawson College shooting in Montreal in 2006, in which one student was killed and 19 others wounded.

Entries on the shopper center shootings at the Sello Mall near Helsinki, Finland, in 2009, and the Omaha Westroads mall shooting in 2007 were also edited.

Lanza is already known to have harboured an interest in mass shootings and police have previously found a New York Times cut out in his room about the murder of five people at Northern Illinois University.

Articles about Anders Breivik, who killed 77 people in 2011 in Norway, were also recovered.

The Courant goes on to note that  investigators believe the online persona believed to be that of Lanza’s exposes a different dimension from what evidence suggests was an isolated lifestyle from age 17 on. The poster seems engaged with others online and is often helpful when comfortable with the topic, such as suggesting a particular firearm for someone in the chat room who said he was 18 and looking for a rifle as a gift. The poster recommends a semiautomatic rifle that “can be found for under $650.”

In the virtual world, the poster appears to have some stature. On the gun websites, the poster believed to be Lanza operates as an equal with others on the website who appear to be older, seasoned firearms experts.

The poster also was not shy about starting a debate online, asking in chat rooms on glocktalk.com in April 2009 whether adding RAM to a computer increases its speed.

“Am I just an inattentive philistine or has additional RAM in a computer which was not already deprived of it never helped any of you?” the poster asks.

The posts suspected to be Lanza’s stop abruptly in late February 2010.