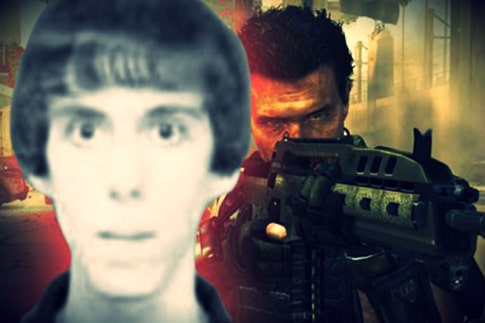 Authorities have now posited that Adam Lanza, the 20 year old Sandy Hook Massacre shooter may have copied a scenario off a video game when it came time to unleash his killing spree that left 26 dead.

Although little of Lanza’s motives are necessarily known, the young man made a concerted effort to make finding out what was going on his mind prior to the shooting all that more difficult. Said to have purposefully have smashed his hard drive to bits and obscuring his online habits authorities now believe that the scenario surrounding the day of the murder closely following that of thousand of violent video games found at the house.

It is thought the young man played the games for hours and one game in particular that has caught authorities’ attention is a series called  ‘Call of Duty,’ an intense shooting game set during World War II.

Tells The Hartford Courant reported that detectives are probing whether Lanza may have been copying a scenario from one of those video games as he fired rounds from his mother’s Bushmaster assault rifle in two classrooms at Sandy Hook Elementary School on December 14.

Despite a milieu of questions still being left unanswered as to what may have exactly triggered Adam Lanza’s rampage and why CT’s Sandy Hook Elementary school was targeted there was these following comment off the web that made me sit and wonder as well:

We’ve heard nothing about the medication(s) the shooter may have been taking or withdrawing from, because his “medical privacy” is being protected under HIPAA law. Do you think it’s possible such a person was or had not been on prescription SSRI drugs? See SSRI Stories. If you think Big Firearms is powerful and sinister, what do you think about Big Pharma? The shooter selected the softest possible target (a known “gun-free zone”) filled with women and little children, those least likely to effectively resist him. The shooter selected victims the death of whom, and number of whom, would garner him the maximum notoriety. This quintessentially brainy, geeky nobody was obsessed with “correcting the injustice” of his overlooked brilliance by becoming a household name. His utterly self-absorbed megalomanic nihilism ensured that he cared nothing about the means. Sticky issues of evil character and medical practice are involved, so government opportunists seize the handiest, easiest lever.

It was all the video games and guns, it had noting to do with the fact his mother always said she would get him help and never did. In my opinion the blood is on Nancy Lanzas hands for being an enabler and waiting until he was 20 to even think about getting him help…and yet never did. She is to blame for taking her son, who she was already concerned about, to gun ranges . She removed him from school and home schooled him thus making him more of a loner, and spoke to drinking friends that she was worried about him and yet continued to leave him home while she was a bar floozy. I’ve played violent video games, I own a gun and yet I have a high regard for life, it’s rare I even kill a bug and when I do it’s something that feeds on people like mosquitos and ticks. The same will go for people, if someone comes into my home and is an immediate threat to me, my family and my pets, I will use it.

There are still so many things that make no sense with this whole story.

This is so asinine. Yeah, video games is the cause… not uncontrolled access to deadly weapons. There are tens of millions of people who play Call of Duty constantly. It’s like a cult that game. You would think there would be a massacre like this every day. Ugh…. just more people who know how to control public opinion using media misdirection. The NRA, Fox News, the Tea Party… just throw out an inflammatory topic to distract from the real issue you don’t want discussed. And people eat this ish up. Ugh.

The problem is the mother did not have to deal with the real world, she got about $290,000 per year in alimony, lived in a 1.5 million house, so the only thing she had to do was wait for the $24,000 alimony check every month. If this women had to deal with life’s problems as most people, she might see how bad her son was and deal with the problem. She also taught her son how to use guns and never locked them up. She lived in a dream world and never had to deal with reality, and many people paid for it with their lives.

Because a gun is actually what was used to kill all those kids. Not a PS3 game. Whatever the motivation was, if this kid didn’t have access to that gun 20 kids would still be alive. I know that’s a tough pill to swallow for gun advocates but it’s the facts. You can try to come up with all the motivation in the world for violent crimes… bad parenting, violent movies, games, poverty, mental illness… you can’t control any of that. We can’t even pass a budget in this country but you want the entire American society and culture to change? I don’t think the government would be any more efficient at properly regulation weapons, but that’s a lot more realistic than all the gun advocates who say ‘we have to stop the violent movies, video games, mentally ill’ etc etc