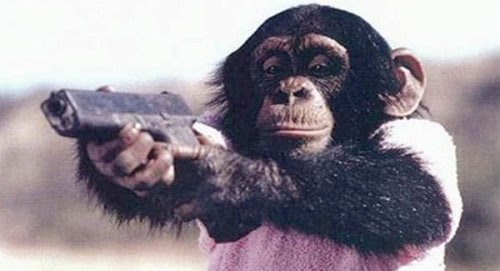 Hitting media stands today is the revelation that exactly one year before perpetrating the Sandy Hook massacre which killed 26, Adam Lanza reportedly called an Oregon radio station and compared a chimpanzee that ripped a woman’s face off to a “teenage mall shooter.”

“His attack can be seen entirely parallel to the attacks and random acts of violence that you bring up on your show every week, committed by humans, which the mainstream also has no explanation,” Lanza said of Travis the chimpanzee, who attacked Charla Nash in 2009.

“I just… don’t think it would be such a stretch to say that he very well could have been a teenage mall shooter or something like that.’

Interesting cause most people would normally equate violent human behavior to that of a violent animal not the other way round. Unless that is one fails to make the distinction or is devoid of emotion or just simply using an arbitrary play on words.

John Zerzan, the show’s host, told he remembers the call. “The only thing that seemed odd was his voice seemed kind of robotic … but what he was saying made sense,” he said.

Two of Lanza’s former high school classmates have since confirmed that the voice is his. And a user named “Smiggles,” which, according to the Connecticut State Police, was Lanza’s online alias, posted about calling into the show on the blog Shocked Beyond Belief. The same user mentioned Travis the chimpanzee in several other posts, according to Sandy Hook Lighthouse.

The subconscious talking or just a long time coming with a smattering of violent acts that inspired Lanza’s taking to arms?