Previous Casey Anthonydefense attorney Jose Baez has just come out with a new book due to be released on July 3. The book titled Presumed Guilty, Casey Anthony: The Inside Story,’ is sure to once again raise controversy surrounding the Casey Anthony case which a year after saw the young mother acquitted of first degree murder charges still has left the nation polarized with the mother’s involvement in the death of her daughter, Caylee Anthony.

dailymail.co.uk: Mr Baez gives an inside look at the explosive trial from one of the people who knew it best — including a description of the elaborate trickery involved in sneaking Anthony away from court after her acquittal so that reporters couldn’t follow her.

The book essentially builds the case that as bizarre as her behavior and complicit as it seemed it was only a result of her mental instability as opposed to her actual involvement in the death of her daughter. Mr Baez goes on to argue that Ms Anthony’s behavior was tied to a ‘fantasy’ world she had built around herself and that her lies were parallel to someone with mental issues.

Describing how Anthony led detectives on a wild goose chase, even taking them to Universal Studios where she falsely claimed she had a job, Mr Baez writes, detectives ‘should have stopped and realised, “Wait a minute, we’re not dealing with someone who is playing with a full deck”‘.

Anthony originally told detectives that her daughter, Caylee, was taken by a babysitter in June 2008, and that she didn’t report her missing for more than a month because she was searching for the toddler on her own. According to Mr Baez if you can believe him, her lapse in concentration or her inability to bring her daughter’s where abouts after a month was tied into her being sexually abused at the hands of her father as a child. A notion that many find incredulous to say the least. 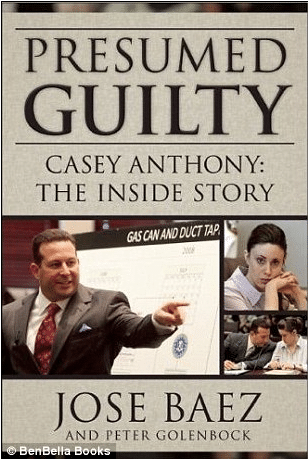 Mr Baez also criticises the way he was portrayed in the media as an inexperienced attorney taking on one of the highest-profile criminal cases in recent memory.

‘The public may have been convinced that I was an idiot but I let it all roll off my back,’ he writes.

Hmm, could this tell all confessional book be Mr Baez’s chance at getting at the payday that to date has eluded his previous client Ms Casey Anthony? Could it be an attempt more not at exonerating her but exonerating him and creating the idea that he had the toughest case of all to try and that beyond odds he managed to get his client off free. Even if he has failed miserably to date to resurrect her legacy and one assumes his very one.

No blood money Mr Baez thank you very much….

Casey Anthony on the run as hideout is leaked

Casey Anthony: fat, unloved and broke. But why do we care?