The wheels just keep on turning… as if the whole Casey Anthony saga couldn’t get any crazier as far as the Briley’s go, Holly Briley has now tried to EXTORT high-profile attorney Kim Picazio.

You may recall Picazio’s involvement in the Haleigh Cummings case – she once represented Crystal Sheffield, Haleigh’s mother. However, Picazio has absolutely zero involvement with Casey Anthony or any of the players surrounding her… until a few said players decided to drag her in to things.

A short time ago a Twitter handle by the name “CaseyGotSxrewed” appeared, (just as twitter handle user ameliasobelhas virtually stopped posting)trashing Picazio, Brianne Patterson, Levi Page and a few others. For reasons that has everyone still scratching their heads, the mysterious Twitter user decided to drag Picazio into things even further with the help of Ms. Briley — by way of extortion.

Radio Newz Blog  (twitter handle here) was kind enough to share the correspondence between Holly Briley and Kim Picazio – the threats that the Briley’s make are very clear in the documents which are available below.

Extortion is an ugly game to play… and it’s especially ugly when you don’t know what you’re doing… I’m completely overwhelmed with information I just received and it’s going to take a bit to process it… and then I guess all Hell breaks loose.. Never did I dream Holly Briley was stupid enough to send Kim Picazio threatening FB messages and what she thought was an untraceable fake email. SMH!

It seems the saga continues as Ms Casey Anthony’s probation draws closer to an end and the court’s imposed silence on Ms Anthony’s briefs will eventually have to be made public. The question of course is will team Casey Anthony beat the punch line to collect on all that blood moneybeing offered as they now try a new tact in this increasingly diabolical scenario. 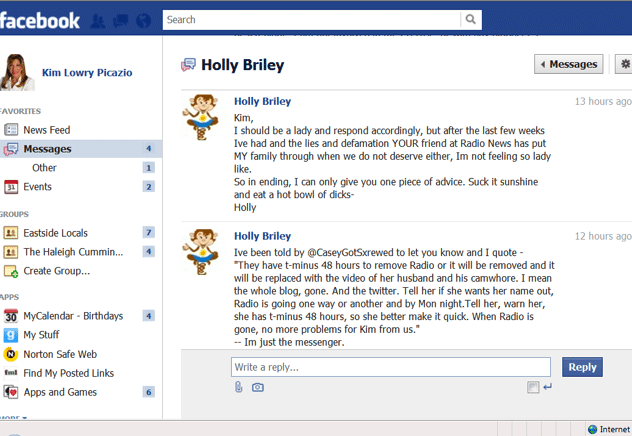 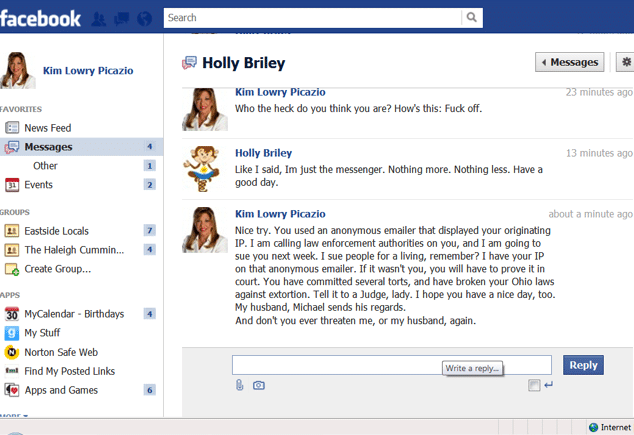