If there’s one thing America hates it’s the bad guy getting away. In the land of the free, decorous and honorable, the very idea that a woman can kill her 2 year old child, go on drinking  binges, best body contests and only after 31 days later reach out to authorities to disclose that she hasn’t seen her child can only leave a bitter taste to the nation’s collective palette.

To be sure such things are not often done, and if they are they are never tolerated. Except in Casey Anthony’s case not only have they been tolerated by a judgement that found her not guilty (but by default not innocent either in the public’s eyes) they have been exonerated by a legal system that failed to clinically connect the dots of cause of death and motive. Never mind if there’s one thing that American’s excel in it’s taking justice into their own hands if need be. Which probably explains why Sammy Blackwell nearly had her life snuffed right out of her yesterday afternoon. Which is to suggest, Casey Antony may well want to consider plastic surgery the moment she vacate her prison cell this Sunday.

dailymail.co.uk: An Oklahoma woman said she could have died after a crazed woman who thought she was Casey Anthony chased her for miles and rammed her car off the road.

Sammay Blackwell, 26, said that the woman tried to kill her after she saw her working in a convenience store three days after the Florida mother was controversially found not guilty verdict of murdering her two-year-old daughter Caylee.

Shireen Nalley is accused of approaching Ms Blackwell in the store and telling her that she looked like Casey Anthony, before chasing her at the end of her shift and driving into her car.

Kids, like you I’m all for justice, but what are we saying when we start getting in our collective 4 wheel drives and start chasing perceived bandits off the road? Could we begin to argue that in fact the acquittal of the Casey Anthony is just the latest slap to our collective face and that this woman has become the scapegoat of a nation who after years of being lied to, having their homes taken away from them by spurious mortgage brokers who sold our incredible wet dream to us in the first place pleading us to sign the dotted line, their wages cut to unmanageable levels why celebrities and hedge fund titans and their corporate sponsors go on to make fatter pay packets?

Could the attempt to bring collective justice to Casey Anthony be the public’s way of saying; “the bad guy always gets away, and in America, no one should get away if they don’t play by the rules, cause if I play by the rules and am only getting poorer for it, they why bother at all?”

But if the nation is disgusted and appalled with the way things are going, (never mind that some of them, like Ms Nalley who are so high on drugs that they can’t figure out that Casey Anthony is still in jail and physically not the scape goat shopping for new bras, and furthermore have confused Oklohoma for Florida, how we don’t know…) upset that their collective morals are being slapped like meaningless rubber turkeys by hefty corporates, bankers, sex tape exploiting celebrities and now crazed South Florida women who make believe stories there’s this as well:

gawker: There seems to be a rash of confusion lately over the identity of the one, true Casey Anthony. On Wednesday, some people seemed to think she was a black man living in a Philadelphia suburb. (His name is Casey Anthony, too.) Now we have the unfortunate case of Oklahoma resident Sammay Blackwell (pictured, right), who does look a little like Casey Anthony. (Not the black man, though — the white woman from Orlando acquitted of killing her daughter. You see how confusing this can get?)

That’s right, the whole world has now become a possible Casey Anthony candidate. Which is to say even a black man (yes, poor black men…) with a name that sounds like Casey’s, and is Casey, never mind the fact that Casey Anthony is a white woman with firm white breasts (so we were reminded by Nancy Grace who very much objected to tot mom showcasing herself in beauty contests after the disappearance of her child and one suspects you the reader are as equally appalled) can now be hunted down. Which is 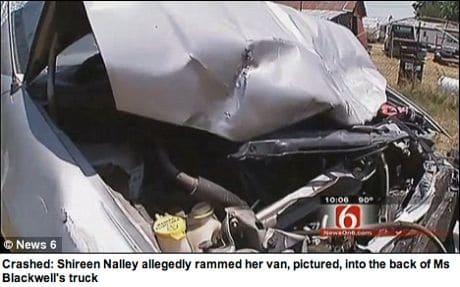