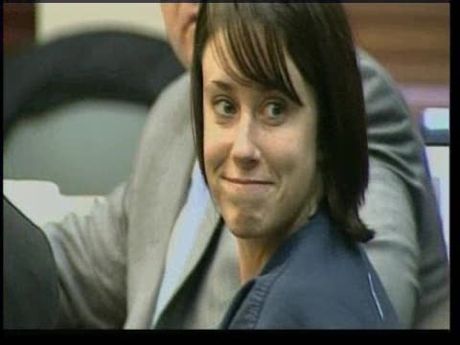 Casey Anthony refuses to see her mother Cindy Anthony as she attempts to visit her in jail.

Casey Anthony at the age of 25 today is the most talked about woman in America. Not because she has created some wonderful, achieved a milestone nor because she won an Oscar. She is the most talked about person because she symbolizes the dichotomy of what Americans have come to believe if they work hard and act with integrity will come to happen as opposed to when you cheat, lie, steal or even murder. In short Casey Anthony represents the notion that in fact bad girls do get away with murder (metaphorically speaking, even if she was acquitted of physically murdering her daughter), and if they play their cards right get rewarded handsomely for it.

What one has to understand about living in America today is that the nation is awash in a plenitude of moral code and ethics. Some of it is obvious- shall not lie, steal, or murder and some of it not so obvious or mired in grays- I shall not abet a known terrorist (but America spends billions of dollars a year abetting warlords and tyrants the world over) , I shall not let my brother starve (but once again America has one of the highest poverty ratios in the industrialized world). What becomes discernable is the clash and contradiction of what we say we want and what actually happens. In some way this is what perhaps has upset the nation. The nation wants justice, honesty,purity, their mothers to unconditionally to love their children and little girls to grow up and become princesses. The reality is that in fact there are a lot of unloved children, a lot of women for one reason or another who can not love as much as we would want them to, which is to say, just because it appears natural to us does not mean it will be natural for those who are forced to live it with their particular limitations and realities.

One has to wonder if the degree of outrage expressed at the acquittal of Casey Anthony has more to say about our collective disillusionment about our legal justice system, the disenfranchisement so many of us experience as the world more than ever reacts and behaves in a way that so often goes against our moral notions. But that maybe that’s the point, that morality is a dying art or perhaps it just never existed- it all may come down to who you end up siding with, how big your gun is and how cleverly you disguised your alibi.

This it seems is the new America even if most of us on the surface openly despise it- which is why no one should expect to be surprised Casey Anthony cash in on a book deal or a movie rights- it’s secretly what we would have wished too had we been on the dock waiting for our verdict to be read.

It is why so often in reality why bad guys often do often end up winners despite what Nancy Grace, the bible or a feel good movie, and most media outlets would like to have us believe. Or to put it another way, boy doesn’t always get girl by the end of the movie, or in Casey Anthony’s case- a young woman isn’t punished because on some level she failed morally to be the mother she could have been, whether she murdered her daughter or not.