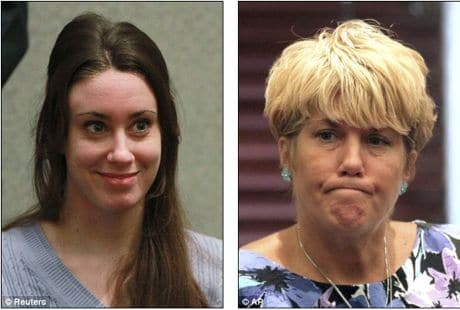 You can count out a family resurrection any time soon.

The scandal that never ceases to amaze took another turn today when it was revealed that Casey Anthony the embittered villain heroine of America who earlier this week was not found guilty of murder turned down an attempt by her mother, Cindy Anthony to come and visit her.

With an appointment set at 7pm Friday, to see her daughter at Orange County jail, Florida, without her husband George (who was portrayed by Casey Anthony’s defense as an antagonist) Casey Anthony failed to even show up.

Perhaps this is a clue as to where Casey Anthony will go upon her imminent release from jail next week and the degree of discord within the family unit this represents.

And according to the dailymail.co.uk there was this following episode earlier this week:

One of the most telling moments showing the animosity between Anthony and her parents came when Cindy Anthony left the witness stand and mouthed ‘I love you’ to her daughter, who rolled her eyes and looked away.

Who will actually take Casey Anthony in once she is released from jail is yet to be seen (but naturally an eagerly awaited scene of the next installment for this made for TV drama), but it seems the girl who has gripped America for the last 2 and half years wont be leaving the public consciousness anytime soon.

Judging from the insatiable appetite that this young woman’s daily movements command it just may be that Casey Anthony has already become a living embodiment of the desired American experience- the elusive TV persona who somehow managed to beat the odds and is now set to live a life of glamor. Or will she…?