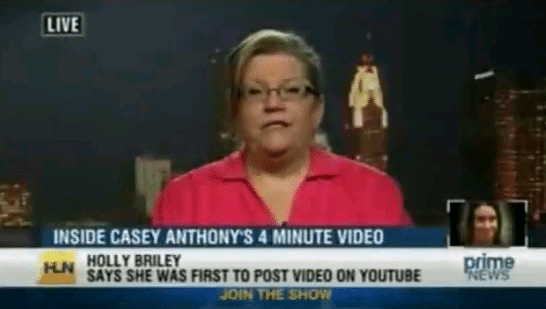 For several weeks now, all has been quiet in the world of Casey Anthony. After the recent video leaks and Holly Briley obliterating herself on national television, most of the key players in this ballgame went into hiding. However, it didn’t take very long for most of us to figure out what Briley was up to.

If you haven’t been keeping up and don’t know what I’m talking about, here’s the cliff notes version: Holly Briley, former Florida resident now living in Washington Court House, OH, appeared on the Nancy Grace show along with Prime News on HLN stating she and husband Jon Briley were the first to leak the video diary of Ms. Anthony, claiming they found it on a “Pay Per View” site. Soon after, many members of the media began to question their story, and at Scallywag we did some digging, tying many of the pieces together – such as how they “couldn’t remember the name” of the so-called “Pay Per View” site, amongst other things.

In short, the Briley’s story just didn’t add up and they were quickly called out on it – even the folks over at FOX News, including lawyer Robin Sax, agreed Holly was kookoo for cocoa puffs. But of course Ms. Briley didn’t like that the walls were quickly caving in on her and immediately went on a campaign of threats – even creating a blog about me and my “colorful Internet past” – posting the personal information of myself and others on her site, “Nomoneyformurder”, as well. The funny thing is, 90% of the “information” she did post was in fact wrong. For example, how I had a brother (I do not) and a husband (I do not.)

Someone ought to let Holly Briley know that typing one’s name into Google doesn’t count as a background check! But wait! It gets better! Holly even went as far as filing a false police report against me. I, in turn, filed one of my own after my number was spammed all over twitter by Ms. Briley, and per the advice of the RCMP have since gotten a lawyer involved and was also told by the RCMP that there are grounds to file both defamation & libel suits against her. Holly also tried to extort high-profile lawyer Kim Picazio.

Holly has since begun making personal attacks against Rob Hensley, the alleged boyfriend of Casey Anthony (though that has yet to be confirmed and Hensley denies this.) As of yesterday evening, Holly has made numerous threats to Hensley via Twitter (which she has since deleted, though you can see Hensley’s tweets to Briley at @RH913) – including to out his supposed liaisons with an underage female to his entire criminal record – which everyone already knows he has, and aside from Holly, no one really gives a damn. 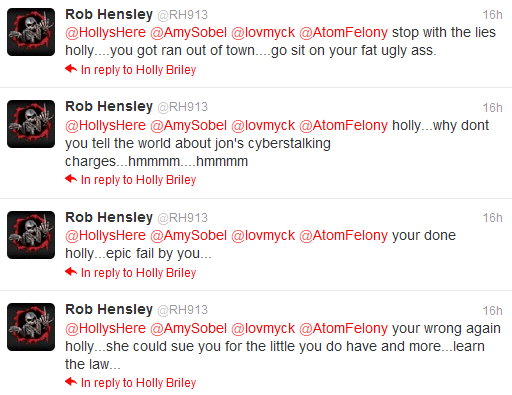 This woman has been caught in so many lies, one would think she’d have given up by now. Then again, when Ms. Briley has been getting as much attention as she has, why would she?

For more on Holly Briley and her antics, you can pick-up a copy of ‘Bully in Ohio’, available exclusively  on Amazon.com for a limited time only. http://www.amazon.com/dp/B007FU9AXG