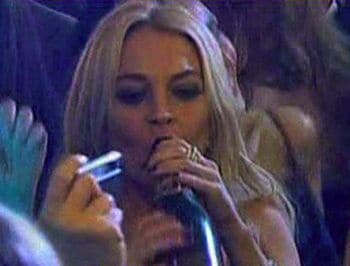 Kids there used to be a time when Lilo could whisper her name to the doorman, high five him a white rolled up $50 bill and waltz into any party her heart desired. That was then. These days the mere sighting of Lilo can send guests running the other way. Which if you can imagine has me and the chipmunks chugging at the tear strains…

nypost: Troubled starlet Lindsay Lohan crashed the party for Leonardo DiCaprio’s movie “J. Edgar” and made such a scene she made A-list attendees “uncomfortable.”

Lohan, fresh from her Playboy shoot and about to go to jail for probation violations, insisted she was an invited guest to the party for the Clint Eastwood-directed biopic about legendary FBI director Hoover, and talked her way past security at the Hollywood Roosevelt Hotel on Thursday night.

Kids if it was me on the way to jail I’d be home sitting in the jacuzzi doing my nails googling my name on my Blackberry laughing along with all them bixches who have nothing but contempt for me, splashing sparkling moonshine into the bathtub to cheer me up. But that’s me. Lilo on the other hand prefers to take her case for prime time straight to the limelights.

A source at the bash told us, “Lindsay was arguing with the security to let her in, dropping every celebrity’s name to get in. She could be heard saying, ‘I have to go and see Leo.’

“Eventually they let her in, but she made everybody uncomfortable. She was aggressive and random, storming around. She tried to get to Leo, but he was surrounded by his security and a posse of his friends.

Storming around? Aggressive and random? Not our Lilo. Even the chipmunks are having a hard time comprehending how our token of high jinks and flying champagne glasses at bixchy nightclub guests could possibly be perceived as a negating force.

“Clint and Leo and Dustin Lance Black were talking, and Lindsay sent one of her aides over, demanding to get a photo with them, but security shooed them away.”

Them bloody ingrates! Don’t they know who our hero Lilo is? What’s an orchestrated photo op amongst media whores? What’s a bit of groveling amongst accomplished Hollywood veterans and a washed up crack head?

Counters Lilo’s publicist (cause that’s what them bixches do):

Lohan’s rep said, “She did not crash, she was invited by a guest who attended the event. I am not aware of her asking for photos with Leo or Clint. She was never asked to leave.” Reps for DiCaprio and Grazer declined to comment.

Never mind one day when Lilo makes it to the next desperate feature of her life she will smile and preen- ‘At least they still love me at the North Pole.’

MY HERO LINDSAY LOHAN IS ORDERED TO GO BACK TO JAIL.

LINDSAY LOHAN: LOOK AT ME, NO MORE METH TEETH (FOR NOW).

MY HERO LINDSAY LOHAN AGREES TO SPREAD FOR PLAYBOY FOR A COOL $1 MILLION BUCKS.

MICHAEL LOHAN: ‘I THINK MY LITTLE GIRL IS A CRACKHEAD.’