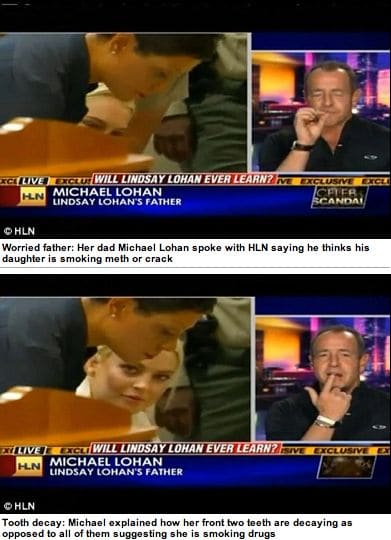 The oh so sudden realization that Michael’s little girl is a drug addict.

Kids while Lilo’s world was capsizing yesterday afternoon, her daddy’s world, Michael Lohan was on the upswing. How and why you wonder? Because Milo was on TV as his daughter was getting shafted explaining to HNL’s viewers how he recently put two and two together and has come up with the conclusion that Lilo is either a crack head or meth head. Both very wonderful options and afflictions to be saddled with.

But that’s neither here or there, because when Milo needs to get his mug out there and score some gravy points and ‘public remember me, I am that dingbat’s daddy’ headpoints he makes sure to put on his alarm bell a little bit earlier than usual, say around 1.30pm and rush down to the studio to wisely wonder what it is about his children that just isn’t adding up. Could it possibly be the parenting? Not on your life! But drugs? Well, let’s read what Milo who’s probably chomping away at his own big giant crack pipe has to say on the matter:

‘She’s smoking either crack or meth, one or the other. I’m not going to shade it.’

‘If you’re talking about prescription medication it would affect all your teeth, not just your two front teeth,’ Michael said about his daughter’s dental issues.’

You can’t dance with the devil and expect to go home with Jesus.’

You can’t dance with the devil and expect to come home with Jesus, but then again you can expect to act like the devil and come out looking like Jesus. Isn’t it good to know Milo’s payday is just around the corner? Don’t you wish you too could exploit your children for a free ride on the merry go round too?

How to Open a Luxury Consignment Business