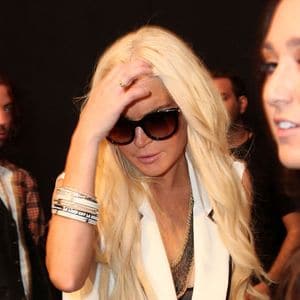 Lindsay Lohan will soon be moving to the North Pole.

Kids, I have to admit I’m snuggled under my blankets (after all it’s a brisk September Friday morning here in NYC) with a 2 ton tequila choc chip ice cream bucket commiserating of what’s to become of our collective media whore Lindsay Lohan who it seems has finally outgrown her welcome status to the rich and fabulous that she aspires to.

It seems after Wednesday night’s episode of slicing up some poor innocent bystander at the Boom Boom room with her belligerent behavior (yes the photos are juicy) word has started hitting the pavement that this wench is a no go to base persons non grata.

In fact so undesired is our media whore that media and fashion darling Marc Jacobs was compelled to ‘unceremoniously’ kick out the wench who tried crashing the hard to get into fashionista’s party.

styleite: Of course, fashion week parties have been a touchy subject for Lohan since Wednesday night, when she was alleged to have thrown a full drink (glass and all!) at a photographer covering V Magazine‘s Liz Taylor themed party at The Standard Hotel in New York. Styleite attended the party, and while we didn’t see the actual glass throwing, we did see the poor girl whose night ended in a bloody mess when she slipped and fell on the shattered glass, cutting her arm.

Wanting to avoid the same fate for one (or possibly more) of their guests, the people who organized Marc Jacobs party are said to have set up checkpoints to prevent La Lohan from getting in — or at least that’s what we hear from Observer reporter Nate Freeman, who attended the party.

Kids, let me tell you, Nate is a hawt bixch (yes I am an avid reader of his high society jinks just like you are) and if Nate tells us that Lilo was cock blocked from the good life who are we to refute him?

But just in case you think Lilo caved in just like that you’ve got a bottle of tequila crashing into your face, cause according to another top blogger from WWD, comes this report:

Nevertheless, Women’s Wear Daily tweeted at 11:15 last night that Lohan was making her way through the party, where attendees no doubt allowed her a wide berth, so as not to incur her wrath. Lohan made it all of six minutes before being bounced from the party — WWD tweeted again at 11:21 to say that she had left.

Hawt bixch. Six minutes? Frankly between you and me that doesn’t leave much time for Lilo to look for a half empty tequila bottle and start flinging it at other annoying hawt bixches. After all let’s be reasonable it takes Lilo at least 9 minutes to get through a quart of the good stuff before she can then start flinging it like an empty life lost to the winds.

One day whilst Lilo is boarding her plane en route to her one way visit to the North Pole she will wonder and reflect how did she actually manage to throw it away? But at that moment Santa Claus will appear and offer the starlet a gift wrapped camera which upon Lilo will turn upside down to check for a hidden compartment for Tequila before tossing it into the abyss shamelessly crying that ‘if only the world had understood her….’

DID LINDSAY LOHAN SLICE UP A FELLOW REVELER AT V MAGAZINE’S PARTY AT THE BOOM BOOM ROOM LAST NIGHT?

Don’t you wish you were a shameless celebrity whore…?