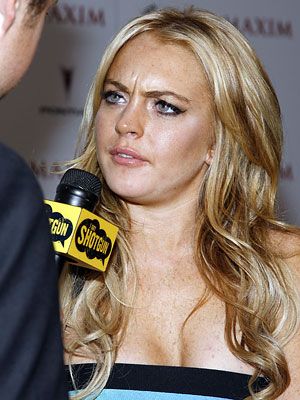 Grunt, sigh, moan, despair, wheeze and sigh again, pass me a shot of moonshine. Today the airwaves are awash with the news that America’s favorite metaphor to disillusionment  and over the top behavior  actress ‘Lindsay I can never get enough sugar puffs in my breakfast cereal Lohan’ is about to face grand larcency charges in relation to her role in manhandling stealing a necklace.

nypost: Lindsay Lohan will be charged today with felony grand theft for allegedly swiping a $2,500 necklace last month from a California jewelry store — a rap that could land her serious time in the slammer, LA prosecutors said yesterday.

Lohan, 24, is to be arraigned and have bail set this afternoon at an LA County courthouse.

It’s the latest legal landmine tripped by the troubled star, who is already on probation for a series of DUI busts.

Kids, I don’t know about you, but me and the chipmunks are viciously looking through the bathtub for our own necklace. The local police sent us a search warrant, but between me and you I think it’s just a case of one of the chipmunks simply forgetting to return it after we had ourselves some tea and cucumber sandwiches while we were soaking our tired pores. But that’s what happens when you day dream and take bathtubs with your favorite drama hero on auto rewind.

As if that’s not bad enough, prosecutors are expected today to ask for a six-month jail stint for Lohan for violating probation related to her previous DUI charges, RadarOnline reported.

Cops believe that Lohan sashayed out of Kamofie & Company in Venice on Jan. 22 wearing the gold choker with semiprecious stones without paying for it.

Of course unbenownst to the world, Lilo is in negotiations with studio heads to have the paparazzi move into the local jail cell diagonally across from hers so we can all be sure to get up to the minute necessary updates on the collective drudgery called ‘if only I was as disfunctional glamorous as you.’ If approved by studio heads, Dina and co host Michael Lohan will be offered their own jail cells down the hallway too.

Lohan could be racking up more legal bills in coming months.

Riverside County, Calif., authorities are still deciding whether to charge her in connection with a December shoving match she had with a worker from the Betty Ford Center while she was in rehab.

Meanwhile in Las Vegas, Lohan is facing a breach-of-contract lawsuit by tanning and airbrush specialist Lorit Simon, who claims Linz owes her $40,000, according to TMZ.com.

One day when her fellow prisoners make Lilo the queen bitch of the block she will smile and strut in the knowledge that at the end of the day we are in more captivity than she could ever be.

Don’t you wish you could get your own gig as an American icon too?