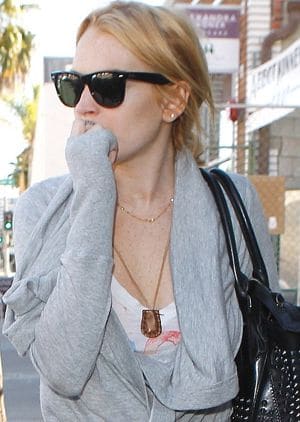 It seems the paparazzi finally have their favorite target by the throat: here’s the photo of LiLo that allegedly led police to investigate her for felony grand theft of a ‘one-of-a-kind’ $2,500 gold necklace.

Now police say surveillance footage from the store, Kamofie & Company, shows LiLo wearing the necklace, but never paying for it or returning it to the salesperson, and ‘a source’ for the gossip site RadarOnline confirmed, going so far as saying: “This doesn’t appear to be a miscommunication between two people, as Lindsay is claiming. Lindsay says she borrowed the necklace, the evidence just doesn’t support Lindsay’s story.”

And judging from her nervous posture in the picture, we can already guess what the lawyers will be saying, especially since the necklace — which has already apparently depreciated in value $5,000 as first reported — is not the first piece of jewelry America’s juiciest celebrity tabloid sensation has been accused of stealing.

Lohan was the subject of speculation after staff at the photo shoot reported overhearing her ask repeatedly to keep the Dior jewels.”

Whatever the case, one has to wonder why Lindsay, or anyone in her alternately unenviable and idealized position, would not only steal something so visible, but then wear it uncovered knowing full well she’ll be photographed with it.

Is it that Lindsay (as the celebrity cliche goes) wanted to be caught again, that she somehow perversely wanted the negative media attention, or is it – as her attorney will likely argue – that Lindsay wore the necklace because she somehow believed she’d borrowed it, was guilty of no wrong? (The kind of self-delusion only an American celebrity could be capable of…. or at least be acquitted on.)

Even more importantly for all of us so unhealthily obsessed with her, is this just the beginning of Lindsay’s  ‘Winona Ryder period,’ or has the same tool that fueled her fame, a paparrazo’s photo, finally spelled the end for the headline-maker known as LiLo?