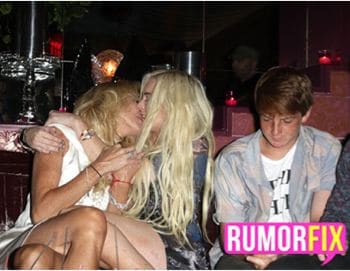 Kids, I know, I know, it looks what it looks like but let me be the first to assure you it’s really just two grown up adults expressing intimate approval of each other’s existence through their locked lips and tongues. After all let’s not be shy, it’s probably nothing you haven’t thought about 48 times a day doing with your own mother. I know I have. Especially after I have swigged a bucket of tequila and had some shameless coke dealer convince me to hoover in a pound of the good stuff. It’s obviously what’s going on here right?

Anyway, this photo has started making the rounds pursuant to moma Lohan and her peachy good thang and her other siblings getting together for moma Lohan’s 49th birthday at downtown hawt spot Beauty and Essex this past Thursday evening.

Of note, the young boy to the right of moma and Lilo is moma Lohan’s young son- and if you would like I can explain what he’s thinking as he nervously looks away:

” God help me, she probably thinks I’m going to draw up to her and pound my chops against her too, but that gift wont befall until I at least turn 16. And by the way, if the camera man wasn’t here  I could just about kill myself, but of course I’d end up being grounded for stealing my mother’s and my two sister’s thunder….’

Aren’t you happy you’re addicted to the drama called the “Lindsay Lohan pony show and her co dependent family?”

DID LINDSAY LOHAN SLICE UP A FELLOW REVELER AT V MAGAZINE’S PARTY AT THE BOOM BOOM ROOM LAST NIGHT?