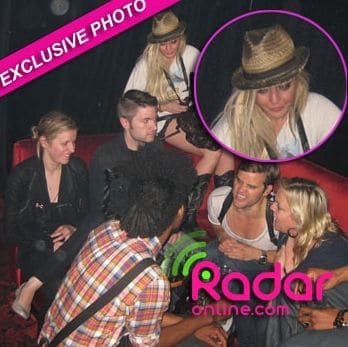 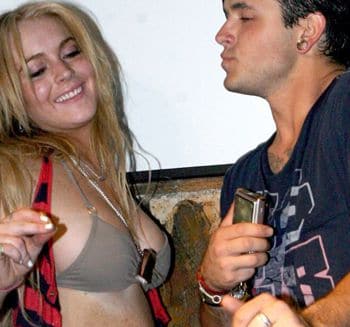 Getting loaded and grabbing strangers wrists makes for a happy dizzy world.

Just when you think Lilo our communal scapegoat has decided to call it a day at the shock and poke department she’s irresistably drawn back in for another round of slap em high and see where they land department. Of course any one with even half an eye ball can see that this is the role that this bitch has been pinning to play all along. Anyway, here’ s what radaronline had to say about the latest fiasco which is now making the rounds of mankind.

radaronline: Troubled starlet Lindsay Lohan allegedly grabbed the wrist of a woman who tried to take a picture of her about 2 a.m. Sunday in a Hollywood nightclub, RadarOnline.com has learned.

Then, someone in Lohan’s entourage reportedly grabbed the Nikon point-and-shoot camera from the hands of the fan and dumped it into a bucket of ice used to chill booze bottles.

So far sounds like another Sunday night at the slaughter house. But since radar is involved it only gets better, cause even radar knows getting to the bottom of Lilo’s dysfunction is an implicit act for mankind to get to the dirty of its own existence.

The camera’s damaged, but RadarOnline has the exclusive photo that sparked the ruckus.

And in case you didn’t know, exclusives is how we media people pay the landlord and of course keep you happily entertained and sufficiently mind fucked.

“We didn’t press charges because we thought it was funny at first,” said an eyewitness who asked not to be identified. He and three friends, including the owner of the camera, sat for an hour at a table next to Lohan’s. “We all were drunk. But then we figured out when we got home that the camera was broken because water seeped in. The memory card, though, was still good.”

Which is what really anyone cares about. Cause getting another picture of honey drizzle attendees malfunctioning is all we really could ask for given our own existential despair.

The incident occurred at the new Paul & Andre Hollywood nightclub. In the photo Lohan, 24, who last week escaped serious time behind bars after pleading no contest to a theft, can be seen sitting on the back of the couch while her friends are partying. According to the source, so was Lohan!

“Lindsay appeared to be ‘belligerently drunk,’” the source said. “She and her people were doing shots of something all night. She looked like she was falling all over the place. She was being stupid.

Belligerently drunk, as opposed to catatonic? Or how about obtuse? Surely there must be other fancier adjectives one could use to describe the messiah having a fistful teacup of tequila?

“When she grabbed my friend’s wrist, another woman who was with Lindsay grabbed the camera. She kept saying ‘I need that camera’ over and over again. So the woman got it and sunk it into the ice buket.”

The spywitness said there was no other incident.

And where once the whole sordid evening would have normally have devolved into a Dukes of Hazard fist fight, humanity was deprived of the requisite you ain’t nothing but a hound dog fist fight anomaly. Which is to say Lilo wasn’t that drunk after all- after all , 120 house day arrest is definitely a bummer, but a 240 day LA county jail arrest with no spinning tequila bottle- now that’s definitely hard labor.

Aren’t you glad you’re not a perfect little mess too?