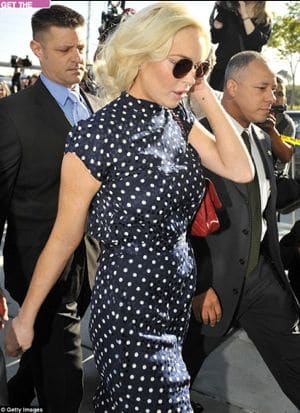 Kids in some weird way justice today was served today but in the real world the justice dished out to our collective heroine amounts to a petty slap on the wrist courtesy of the jam packed jails that our love interest Lilo will probably only get to see anywhere from 3 minutes to 9 minutes a far cry from the 30 to 270 day sentence imposed by our fighter of greater good Justice Sautner.

Rather than sending our Lilo back to jail today our heroine was given the liberty to continue shooting her $1 million Playboy shoot because in Los Angeles finishing nudie magazine covers counts as legitimate reasons as to why you can take a long sip of your whiskey before tending to the task of stripping for vast fortunes and then taking an in and out (quite literally) visit to the local jail house.

Justice Sautner then went on to ramble something about some half way house refusing to take on Lilo because even they consider her ass bad news which probably sent our heroine a shiver of relief as she was once again ostracized to the privacy of the morgue (because dead people can’t complain) where she will serve the remainder of her probation and any time not physically served in jail even if the judge tried to make it sound like Lilo will be given no freebies this time, no house arrests, no rooftop parties,no drive by coco pop deliveries. Zip.

One day whilst our hero is licking the porridge off her prison spoon she will catch the reflection of her tousled mane, the sliver of half dried coco resin and the expression of ordinary prisoners wondering silently to themselves why crime only pays when you are a pampered celebrity whore with the 24 x7 benediction of legal system custom made for movers and shakers on the go.

If only you could be as fabulous as Lilo…

LINDSAY LOHAN: LOOK AT ME, NO MORE METH TEETH (FOR NOW).

MY HERO LINDSAY LOHAN AGREES TO SPREAD FOR PLAYBOY FOR A COOL $1 MILLION BUCKS.

MICHAEL LOHAN: ‘I THINK MY LITTLE GIRL IS A CRACKHEAD.’