Michael Lohan: ‘I think my little girl is a crackhead.’

Lilo will always be my preferred hawt bixch.

Kids, take a solemn look at the above picture and you will notice the frothy double chin starting to set dour expression of a media whore treading perilously close to that precipe  called the point of no return. But that’s okay too, because it seems this is what Judge Sautner must have meant yesterday when she told our heroine ‘and I hear you’re an actress or some shit like that.’

The truth is Lilo is an actress of the highest caliber, but as you can see, one crack pipe plus another crack pipe equals two crack pipes, which is what Judge Sautner was talking about when she was referring to our hero supposedly being an actress. An actress that gets to make the candid camera goodness of mug shots.

Remanded to appear before the court on November 2nd, Lilo must be wondering to herself if this is indeed the perfect action movie role that she has always envisaged playing. Either way, the tears of Babylonia are wildly slipping down her gates as the world looks on and wonders, will a solid little stint see our heroine right? 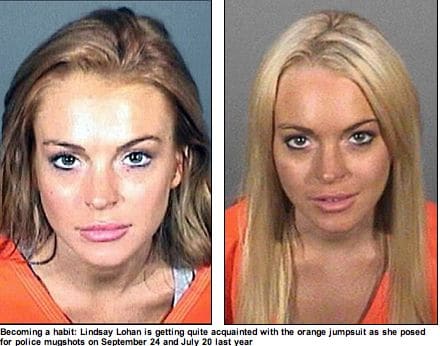 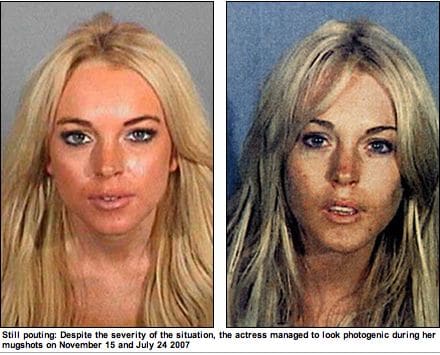 See which mugshot best fits Lindsay, because there’s nothing that says ‘fashion trendsetter’ when you too will soon be seen sashaying down the street with your own ‘I’m a Lindsay Lohan mugshot fan for life!’ t-shirt.

Shouldn’t you be wearing this hawt to go fashion accessory too?