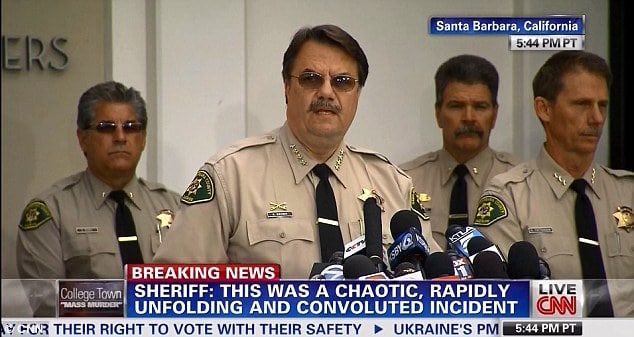 In the aftermath of Elliot Rodger’s retribution plot, questions are being asked if the police had done enough to have preempted Elliot Rodger from exacting his brand of carnage.

In fact at one point, Elliot Rodger’s who it has now been revealed had been planning for almost a year to unleash his venom had come himself to recognize that the police came very close to foiling his plot.

By the time police came knocking on his door at the request of his own father, Peter Rodger who had become increasingly concerned with his son’s mental well being and youtube postings, Elliot Rodger had already acquired the three semi automatic handguns and ammunition that he would come to use in the near future.

Wrote Elliot Rodger in his 140 page manifesto, ‘My twisted world,’ : ‘I had the striking and devastating fear that someone had somehow discovered what I was planning to do, and reported me for it,’

“If that was the case, the police would have searched my room, found all of my guns and weapons, along with my writings about what I plan to do with them. I would have been thrown in jail, denied of the chance to exact revenge on my enemies. I can’t imagine a hell darker than that. Thankfully, that wasn’t the case, but it was so close.’

He said officers told him videos he posted online had alarmed his mother, and he believed either she or a mental health agency had asked authorities to check up on him.

‘The police interrogated me outside for a few minutes, asking me if I had suicidal thoughts. I tactfully told them that it was all a misunderstanding, and they finally left,’ he wrote, adding he removed the videos with plans to repost them closer to the date of his planned attack.

‘For a few horrible seconds I thought it was all over. When they left, the biggest wave of relief swept over me. It was so scary.’

Santa Barbara County Sheriff Bill Brown has since told that his department had been in contact with Rodger three times prior to the killings, including for the welfare check in which deputies who interviewed Rodger found him to be polite and courteous. He would add that the situation did not appear to meet criteria to hold the young man involuntarily on mental health grounds, and deputies took no further action.

The deputies’ report would tell that they had found that Rodger had no history with guns.

Nevertheless since the carnage, many on the web have wondered why Brown’s department hadn’t done a simple check to see if Elliot Rodger had indeed acquired any ammunition in lieu of the concerns of his family and his youtube postings, which may have at the very least put them on guard and given the young man pause.

Police spokeswoman Kelly Hoover has since told the wellness check performed by Brown’s department will be reviewed as authorities continue their investigation.

Since the tragedy, the father of one of the victims, Christopher Martinez,  partially blamed gun-rights activists for the tragedy.

‘Chris died because of craven, irresponsible politicians and the NRA,‘ the father, Richard Martinez told. ‘They talk about gun rights – what about Chris’ right to live? When will this insanity stop?’

No one suspected that he had guns or ammunition so the police would not have had a warrant to search for such things. Police do ask to come into a dwelling “to see if things are okay,” and if they are allowed in, they can take action if they see anything illegal, or suspect. It is doubtful if Rodger would have had the computer on with anything incriminating, nor would he likely have had his weaponry out for his roommates to find. Still, I wonder if the police even tried to get access into the house, or if they just went away when he was “polite.” In any case, it would have been a long shot for the police to have found anything for them to take any preventative action.

Hind sight is always 20/20 and I can guarantee the media would have had a field day if he had been detained for posting the video. In fact ambulance chasers would have had dollar signs in their beady greedy eyes had he been put in custody .There is no way to predict what these nuts will do, psychobabblers pretend they can but only after the fact do they chime in.He was just a spoiled self obsessed brat who couldn’t get his own way .The only thing predictable about the whole incident is the usual liberal fools getting their panties in a twist about gun control

It’s not the Police’s job to monitor people with autism or predict what they might do. This is not the fault of the Police despite the media’s desperate bid to instigate blame.