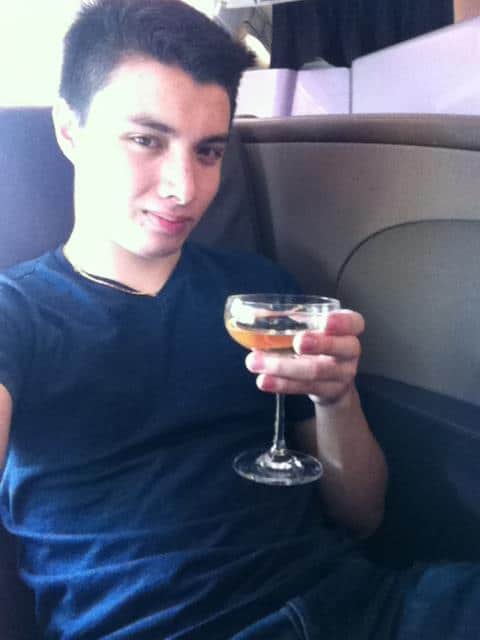 It seems the life and dilemmas of Elliot Rodger has taken a turn for the worse this evening as authorities are now telling upon searching his apartment they came across three bodies and a 140 page manifesto, ‘My twisted world.’

ibt: In the memoir, Rodger traces his life from his earliest memories to his plans for the Day of Retribution, a similar term he used in his last video that he called “Elliot Rodger’s Retribution.” The shooting wasn’t his first act of violence against the peers he hated around him. According to the memoir, just prior to his 22nd birthday, he drunkenly got into a fight with some students at a UCSB party. He attempted to shove a group of students, both men and women, off a 10-foot ledge because the women were not paying any attention to him. He ended up getting thrown off the ledge himself and was later beaten by a group of students.

He also mentions he was seeing counselors and social coaches and seemed optimistic about the help. Still, the memoir is peppered with his frustrations over women and his inability to understand why he was not receiving the attention he believed he deserved.

Writes Elliot Rodger in his manifesto in selected passages (emphasis comes via fusion):

“All I ever wanted was to fit in and live a happy life amongst humanity, but I was cast out and rejected, forced to endure an existence of loneliness and insignificance, all because the females of the human species were incapable of seeing the value in me.”

“My orchestration of the Day of Retribution is my attempt to do everything, in my power, to destroy everything I cannot have. All of those beautiful girls I’ve desired so much in my life, but can never have because they despise and loathe me, I will destroy. All of those popular people who live hedonistic lives of pleasure, I will destroy, because they never accepted me as one of them. I will kill them all and make them suffer, just as they have made me suffer. It is only fair.”

“Why do things have to be this way? I’m sure that is the question everyone will be asking after the Day of Retribution is over. They will all be asking why. Indeed, why? That is the question I’ve had for everyone throughout all my years of suffering. Why was I condemned to live a life of misery and worthlessness while other men were able to experience the pleasures of sex and love with women? Why do things have to be this way? I ask all of you. All I ever wanted was to love women, and in turn to be loved by them back. Their behavior towards me has only earned my hatred, and rightfully so! I am the true victim in all of this. I am the good guy.”

“Humanity struck at me first by condemning me to experience so much suffering. I didn’t ask for this. I didn’t want this. I didn’t start this war… I wasn’t the one who struck first… But I will finish it by striking back. I will punish everyone. And it will be beautiful.”

“I developed a very high sex drive, and it would always remain like this. This was the start of hell for me. Going through puberty utterly doomed my existence. It condemned me to live a life of suffering and unfulfilled desires. Even at that young age, I felt depressed because I wanted sex, yet I felt unworthy of it. I didn’t think I was ever going to experience sex in reality, and I was right. I never did. I was finally interested in girls, but there was no way I could ever get them. And so my starvation began.“ 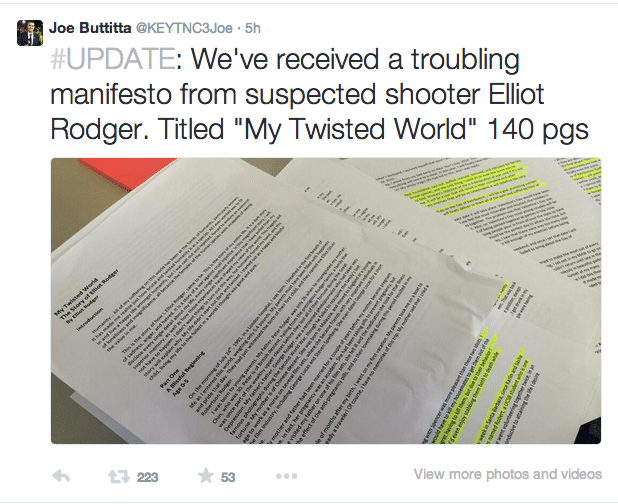 On being bullied in 10th grade:

“I was completely and utterly alone. No one knew me or extended a hand to help me. I was an innocent, scared little boy trapped in a jungle full of malicious predators, and I was shown no mercy.

“Some boys randomly pushed me against the lockers as they walked past me in the hall. One boy who was tall and had blonde hair called me a “loser”, right in front of his girlfriends. Yes, he had girls with him. Pretty girls. And they didn’t seem to mind that he was such an evil bastard. In fact, I bet they liked him for it. This is how girls are, and I was starting to realize it. This was what truly opened my eyes to how brutal the world is. The most meanest and depraved of men come out on top, and women flock to these men. Their evil acts are rewarded by women; while the good, decent men are laughed at. It is sick, twisted, and wrong in every way. I hated the girls even more than the bullies because of this.“

On seeing a family friend kiss a girl:

“In the Spring, something horrible happened that will haunt me forever. We met up with the Bubenheims at the Sagebrush Cantina in Calabasas, and a friend of Pollina’s was there with them, named Nicole, a girl around my age. She sat next to Leo the whole time, and by the end of the dinner, the two of them were making out. Twelve-year-old Leo was making out with a girl who was almost my age. Not only does Leo have a better social life, but now he was making out with girls, AT AGE TWELVE!

“They made out for a long time, and I could see them tongue kiss. They knew I was watching with envy, and they still did it. I bet that lucky bastard took great satisfaction from my envy. There I was, watching a boy four years younger than me experience everything I’ve longed for… to kiss a girl… to be worthy of a girl’s attraction.”

On deciding, at age 17, to get revenge on people who had sex:

“One day I found some posts on the internet about teenagers having sex, and I was once again reminded of the life I had been denied. I felt that no girl would ever want to have sex with me… And I developed extreme feelings of envy, hatred, and anger towards anyone who has a sex life. I saw them as the enemy. I felt condemned to live a life of lonely celibacy while other boys were allowed to experience the pleasures of sex, all because girls didn’t want me. I felt inferior and undesirable. This time, however, I couldn’t just stand by and accept such an injustice anymore. I refused to continue hiding away from the world and forgetting about all the insults it dealt to me.

“I began to have fantasies of becoming very powerful and stopping everyone from having sex. I wanted to take their sex away from them, just like they took it away from me. I saw sex as an evil and barbaric act, all because I was unable to have it. This was the major turning point. My anger made me stronger inside. This was when I formed my ideas that sex should be outlawed. It is the only way to make the world a fair and just place. If I can’t have it, I will destroy it. That’s the conclusion I came to, right then and there.“