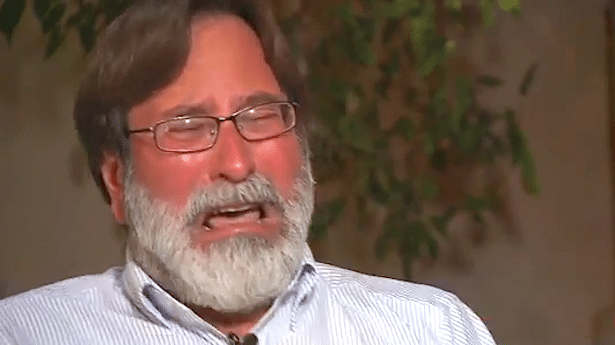 The father of one of the victims of the Elliot Rodger retributions spree over the weekend has demanded that Elliot Rodger’s father, assistant Hunter Games director, Peter Rodger meet with him so they can discuss ways to prevent future massacres.

Told Mr Martinez : ‘I lost my son. He lost his son. We have that in common.

‘We want, if possible, that the deaths of our son and his son should mean something.’

Since losing his son Richard Martinez has sought to address the proliferation of guns and blamed the NRA along with politicians for failing to stem the use of guns in ever increasing gun massacres around the country.

During a press conference Richard Martinez would describe how his 20 year old Santa Barbara student son, Christopher Martinez was an only son to two attorneys who separated but maintained a cordial relationship.

Martinez described his son as a studious child who was a keen reader – including of The Hunger Games and Harry Potter.

Mr Martinez, a criminal defense lawyer, said his son had ambitions to follow him into the legal profession.

‘He was very strong when he decided he wanted to do something and he was trained to argue for his position,’ he told The LA Times.

‘He was just a terrific kid in every way.’

Told the father during an earlier press conference: ‘Our family has a message for every parent out there. You don’t think it will happen to your child until it does.

‘Chris was a really great kid. Ask anyone who knew him. His death has left our family lost and broken.

‘Why did Chris die? Chris died because of craven, irresponsible politicians and the NRA.

‘They talk about gun rights. What about Chris’s right to live? When will this insanity stop? When will enough people say ‘Stop this madness, we don’t have to live like this.’ Too many have died.

‘We should say to ourselves: Not one more.’

Christopher Martinez would come to die as a result of Elliot indiscriminately firing into a convenience store he had momentarily entered, killing the son after taking a bullet to the side and then to the chest. Cameras would show the son walking in smiling, never suspecting that those would be his last moments alive.

Commenting on the need to curtail guns was also Elliot Rodger’s British aunt, Jenni Rodger who told: ‘What kind of a society allows this?’ said Ms Rodger. ‘How can this be allowed to happen? I want to appeal to Americans to do something about this horrific problem.

‘I want the president and the authorities to finally stop these killings. The only possible good thing that can come out of all this is America finally taking action.’

Jenni Rodger would tell she had only met her nephew Elliot three times, and the last time ‘a few years ago and only for a few minutes.’

Since the carnage, Peter Rodger in a statement told of his family’s ‘inconceivable pain.’

In a statement issued through his lawyer Alan Shifman, Peter Rodger told: ‘The Rodger family offers their deepest compassion and sympathy to the families involved in this terrible tragedy.

‘We are experiencing the most inconceivable pain, and our hearts go out to everybody involved.’

Shifman added that family called police several weeks ago after being alarmed by YouTube videos ‘regarding suicide and the killing of people’ that Elliot had been posting.

Shifman added: ‘My clients’ mission in life will be to try and prevent any such tragedies from ever happening again.

‘This country, this world needs to address mental illness and the ramifications from not recognizing these illnesses.’

At present it is not understood whether Richard Martinez and Peter Rodger, two fathers who have senselessly lost their sons to guns have reached out and agreed to actively pursue a pledge to combat gun use in the United States, a dialogue likely to be brought with dilemma and stone walling from the very forces that Richard Martinez brought attention to: the NRA and politicians.