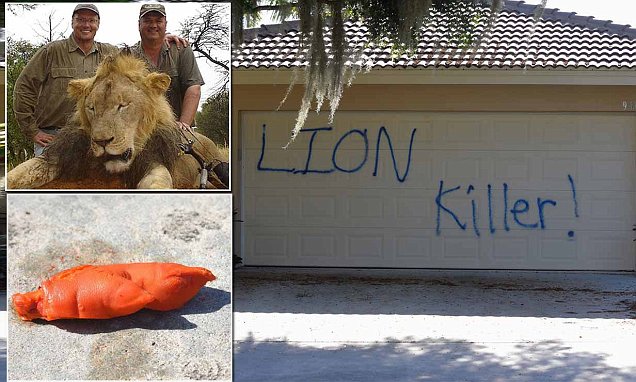 In a gesture almost too true to form and what brought so much disdain against him, reviled Minnesota dentist, Dr Walter James Palmer has been observed hiring armed security guards as the latest acts of demonization against him saw his Florida vacation home vandalized Monday night.

Since been outed as the hunter who illegally felled iconic Zimbabwe Cecil the lion, the well to dentist and committed game hunter has been forced to shut down his business and stay hidden out of sight whilst enduring the wrath of the internet and protesters who have turned up at the man’s Minnesota home and practice.

But with the latest acts of intransigence against him, the hunter has this time felt compelled to fight back, rather than remaining subdued and hidden by hiring armed security guards which are purportedly costing him thousands of dollars a day to hire out.

According to an exclusive via the dailymail, the Minnesota dentist has now also hired private detective agencies, tasked with guarding his families  three lavish properties, which are all crammed with exotic animal heads and mementos from Palmer’s numerous kills. Artifacts the hunter is concerned that zealots and vandals may now try to assuage from him as condemnation against him continues unabated.

The main Palmer residence in Eden Prairie, Minnesota has been closely monitored by police and has so far escaped any damage.

Nevertheless the hunter’s vacation home in upscale Marco Island, Florida failed to escape attention, after vandals chose to target the luxury waterfront residence by spraying the words ‘lion killer’ on his garage door and dumped pigs’ feet on his driveway.

According to the dailymail the property is staged with a hunting-themed decor, with exotic animals and safari motifs on the wallpaper, drapes and upholstery.

The yard features stone plant pots shaped like Easter Island heads, statues of elephants and a jet ski hoist painted and customized to resemble a giraffe.

Offered Zalisko: ‘I certainly hope we don’t see any repeat of what happened,’

‘But if we do, the people will be caught on camera because we’ve installed closed circuit TV on the property.

‘A lot of those cameras are hidden. We’re able to document all the license plates coming on this street.

‘We’re going to have armed private investigators on the premises and these people risk being arrested and locked up for trespassing.

‘It could be a mixture of kids and then some wacky animal rights activists. Personally, I can’t really understand why they are doing this.

‘There are millions of abortions round the world. Nobody is doing this for the abortions yet they will for an animal.

‘People hunt every day in Africa. It’s nuts. It’s just unfortunate this was a popular lion.’

Since been outed, Zimbabwe authorities have said they are seeking to extradite Palmer but as of yet no official notice has been rendered to US authorities whilst Palmer remains in hiding, unbeknownst to even family where he may currently be.