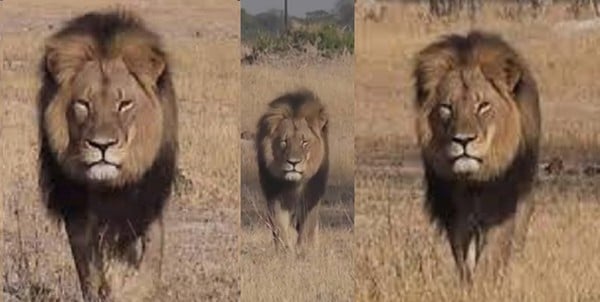 Whilst Minnesota dentist Walter Palmer has come to endure the wrath of Americans appalled at how one man set about gaming Zimbabwe wild cat Cecil the lion, little regard has been paid as to how hunting actually takes place in Africa and the degree of complicity local governments have in enabling ‘dubious’ practices to persist.

The reality is that the killing of such animals happens every day in Africa, where rich trophy hunters, mostly from the U.S. and Russia pay huge fees to shoot wild creatures. Most whom don’t have Cecil’s fame and most whom don’t make it to the attention of local press.

‘Cecil was beautiful — one of the most beautiful animals you’d ever see,’ says Johnny Rodrigues who runs the Zimbabwe Conservation Task Force, a charity dedicated to protecting animals.

‘Nine times out of ten, during a safari drive, you’d come across him walking with his family. He was one of the animals it was guaranteed you’d see. Thousands have seen him. Instead of protecting him, they go ahead and kill him.’

Much filmed and photographed by tourists, Cecil was known all over the world. His slaughter, unusually, has prompted a full investigation by Zimbabwean authorities into the circumstances of his death.

Yet interestingly despite assurances that charges will be meted out to the hunter, surprisingly none have in fact been delivered, whilst the Minnesota hunter remains in hiding, bracing for what may continue to come.

While local authorities have asserted that, ‘both the professional hunter and land owner had no permit or quota to justify the offtake of the lion and therefore are liable for the illegal hunt,’ questions remain as to when or if Walter Palmer will also be charged with illegal poaching or at the very least knowingly bribing guides or authority figures to facilitate a hunt that otherwise would have been illegal.

Which begs the question, why are authorities dragging their heels in bringing charges against the ‘outlaw hunter’, as many have demanded?

The answer to that sadly boils down to fees, and the money that locals receive by agreeing to ‘arrange’, ‘facilitate’ such hunts under the auspices of Robert Mugabe‘s government where nebulous and ill enforced standards regarding hunting remain in effect.

A report this morning from the financial times draws attention to living standards plummeting in Zimbabwe to levels last seen in the 1950’s since Mugabe has pushed through disastrous policies.

Average life expectancy fell from 63 years to 43 years. Unemployment rose to 85 percent and with the cholera outbreak of 2008 that killed thousands, Zimbabwe has been demonstrated to now be a failed county.

Amid the human suffering, starving people have resorted to killing their pets and wildlife to survive.

For African governments where trophy hunting is legal, including Zimbabwe, South Africa, Namibia, Tanzania, Botswana and Zambia, the practice can bring desperately needed money into their ill economies.

According to a study by the African Wildlife Conservation Fund in 2006, South Africa generated around $100 million a year from trophy hunting. More recent statistics put that figure at nearer $200 million a year.

After all it may come as no real surprise as to why lions have seen their natural population dwindle from 250,000 in the 1970s to merely 25,000 today.

Globally, the African lion is listed as vulnerable, with rapid population declines in both western and eastern Africa. That said, little appears to have been rendered in addressing the deplorable situation with wild game animals.

National animal advocacy non-profit Born Free USA joined a coalition of several organizations petitioning the US Fish and Wildlife Service to list the African lion as threatened. In light of Cecil’s killing, Kate Dylewsky, a program associate with Born Free USA, said the group was waiting to hear whether the African lion would be listed as threatened under the act. Of course how long we might have to hear back is anyone’s question.

Responding to the crises, WildAid executive director Peter Knights has argued that the hunting industry needs to do more to ‘clean up its act.’

Told Knights: ‘The industry needs to clean up its act, and it needs to be the first to condemn this action,’

‘Hunting can have benefits to conservation. It can generate revenue to conserve habitat, and it can help local communities. But it must be done ethically, and it must be done legally. And it seems that in this case those rules have been broken.’

What may considered a legitimate ‘hunting’ fee in reality may amount to no more than a ‘bribe’ by big game hunters all too aware that local authorities will do little to enforce standards unless of course the hunted happens to be a very famous prized animal, such as Cecil the lion, and even then, one can’t be sure if hunters like Walter Palmer, with so much money at stake will be brought to legal account?