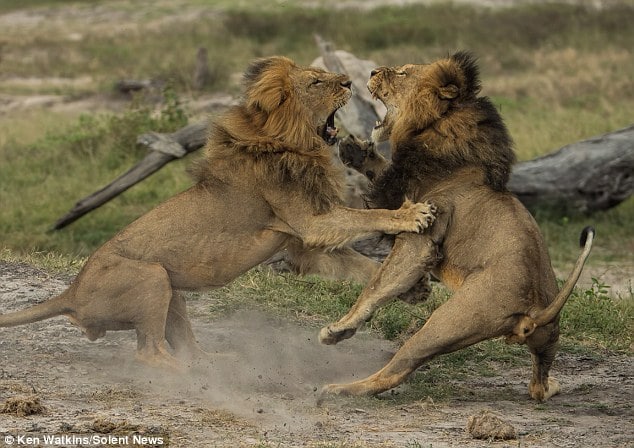 Jericho the lion has this Saturday afternoon been allegedly shot dead after an illegal hunt told Zimbabwe authorities.

The feline brother of recently hunted down iconic lion, Cecil the lion at the hands of Minnesota dentist, Walter Palmer, came to happen circa 4pm at Hwange National Park.

According to Johnny Rodrigues, head of the Zimbabwe Conservation Task Force, Jericho the lion, the brother of recently deceased Cecil the lion was gunned down by a hunter operating illegally.

‘It is with huge disgust and sadness that we have just been informed that Jericho, Cecil’s brother has been killed at 4pm today,’ the Zimbabwe Conservation Task Force said Saturday on Facebook.

‘We are absolutely heart broken,’ the Task Force said.

Nevertheless soon after the declaration of Jericho the lion’s death, a researcher with the Hwange Lion Research Project told the Associated Press that Jericho was not in fact dead based on his GPS tracking device.

‘He looks alive and well to me as far as I can tell,’ said Brent Stapelkamp, a field researcher with the project, which has been monitoring the lion.

The conflicting reports come after Cecil was lured out of Hwange National Park on July 1st and shot with a bow and arrow before being tracked and killed by Walter Palmer, who allegedly paid $50,000 to hunting guides to perpetrate the kill.

Offered Stapelkamp via Reuters: ‘When I heard that report, I had a look on the computer and his movements look regular. He sent a GPS point from his collar from 8:06 p.m. (02:06 p.m. EDT). Everything looks fine.’

The Bhejane Trust, another conservation group, also disputed the reports.

It said on Facebook: False information being put out about Jericho – brother to Cecil – being shot today. According to Brent Staplekamp at Hwange Lion Research, Jericho was alive and well at 8.30 tonight and moving around Antoinette Estate ( where Cecil was shot) with a female. I can assure you no one is hunting lion on Antoinette after the Cecil incident!!

This false information probably stems from a current Parks investigation into another lion shot on a nearby farm on 2nd July. More information to follow

The nation’s wildlife authority announced Saturday that it has suspended the hunting of lions, leopards and elephants outside the park. It was unclear how the new measures would be enforced or whether they went into effect before Jericho’s purported death.

‘Following the illegal killing of an iconic lion, Cecil … it has become necessary that the Zimbabwe Parks and Wildlife Management Authority further tightens hunting regulations’ in areas outside the park,’ the organization said in a statement. Bow and arrow hunts have also been suspended unless they are approved by the wildlife authority.

Uncertainty remains for Cecil’s cubs, whom Jericho had been seen caring for and defending, since his brother’s death, but the survivability of those cubs wasn’t immediately clear in the aftermath of Jericho’s alleged death.

Some of the cubs may have been Jericho’s, said David Macdonald, director of Oxford’s Wildlife Conservation Research Unit, who has been studying Cecil.

Male coalitions, often between brothers, oversee prides of females in lion society and protect the prides from threats posed by outsider male lions, the scientist said.