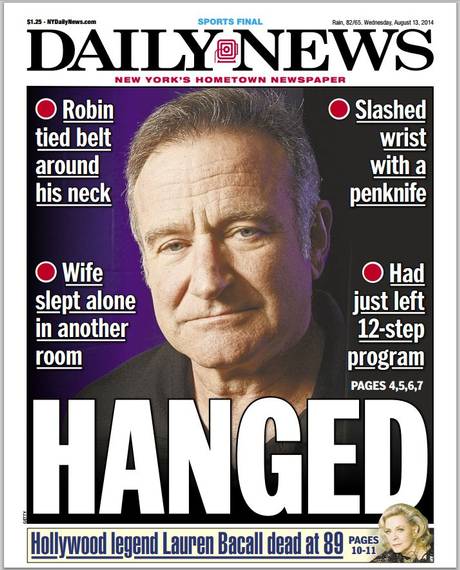 In light of the recent death of Robin Williams, questions have been asked if the actors self demise has come to be trivialized and exploited by the media? Questions which in many ways raise the issue of how media goes about the art of reporting and what it deems news worthy.

Told Scherstuhl via facebook: ‘I took the liberty of re-editing the Daily News’ shameful Robin Williams cover,’ (see directly below)

Granted the NY Daily News may have certainly peeved the memory of the actor and presented him in a stylized sensational way, and without necessarily keeping to the necessary facts of the case, or in this case too brutal stylization of the facts.

Yet that too raises the question of how does media go about reporting news and what expectations ought we have of news outlets? Perhaps it may surprise readers to learn that media outlets aren’t necessarily in the business of just reporting news but providing entertainment, coalescing public opinion and ultimately making money even if it chooses to use sensational images, headlines, knowing full well that is what readers’ eyes will gravitate to and of course bring in the clicks and sales.

Lest we condemn the media one also has to appreciate the general tone of popular culture which has increasingly gravitated to the sensational, outrageous, morally offensive and transitory nature of popular culture, where what may be breaking this morning may well be old news come the next breaking news item that afternoon. Again it comes down to the notion of keeping a skittish culture at large enthralled, entertained and numb as consumers go from one distraction, tragedy, faux pas, outrage to the other.

The edit and original are above, but here are the changes:

Robin tied belt around his neck – Made millions laugh

Slashed wrist with a penknife – Seemed like a good guy

Had just left 12-step program – Struggled, as we all do

Ultimately us editors, writers, bloggers are left with the delicate task of deciding what makes for news, entertainment (have the two become confused?) what and how much to reveal and if the nature of the information at hand serves the greater public interest, offers greater contemplation of cultural dialectics, is expository and does so without defaming, negating its subject matter. A delicate task that this scoundrel has been called to assess from time to time as publicists and lawyers send him letters pleading to take down content that does not necessarily portray their client (a public figure) in the most shining light versus the notion how does an editor bring eyeballs to the table and at the same time cultivate intelligent discussion and a deeper probing of facts,matters and social ennui (assuming such notions still matter in journalism anymore?)

And then there were these comments via huffpo readers (always fun to read) which linked to Alan Scherstuhl poignant dissection of the decay of media, as some would judge it?

I am a Robin Williams fan and I am sicked to see that the media has to exploit this tragedy so much it ends up being more about the media than the person. I am getting to the point that I’m tired of hearing and seeing about it. Doesn’t he, or anyone for that matter, deserve more than being just the ‘hot news’ of the week

I’m not a fan , I think the media should have respect for his family , friends , fans and him . That was a horrible tragedy and people are suffering because of his death .

It is a tragedy that Robin Williams was driven by depression and alcoholism to commit suicide. Is is also true that he will be missed. But…enough already! The media usually lingers tediously over a tragedy until a new one comes along. Let Robin Williams rest in peace.

Why do we need to know the details of his death we don’t his death alone was tragic why dirty it by giving us the knowledge of what he did or how he did it. We need to focus how what caused him to do it and help others to prevent it from happening to them…people stop thriving on the negative we need more positive and more care and more love for each other!!

I agree , too much media coverage. Mr. Williams was good individual with excellent talent , however, front page and national television coverages were in poor taste. Give the family a break and privacy .