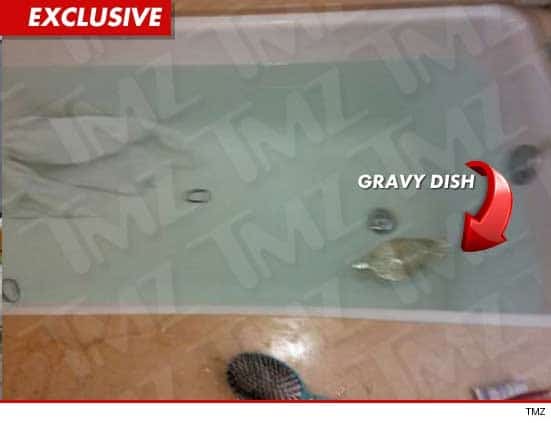 Hmm, nothing says more than profound interest in one’s death than the media ekking out a picture of where and how exactly you died. But can you blame them? Especially when you happen to be a fallen super idol that has managed to bump up your circulation with your untimely death?

That said, it’s time to grimace and revel in the tasteless as we too now jump on the bandwagon and show you the gory image of the bathtub of where troubled singer Whitney Houston died. Of course what strikes one as odd is how serene the bath tub looks like. Really let’s be honest you kind of half expected to see a bottle of Vevue Clicquot floating by the drain and of course at least one half opened prescription bottle. And that’s not even counting the crack pipe that must be there somewhere too. Right?

tmz: The photo was taken moments after police and EMTs removed Whitney’s body from the bathroom of the Beverly Hilton Hotel.

The photo shows the tub still filled with water.  There’s a gravy dish at the bottom of the tub, which Whitney typically filled with olive oil to keep her skin soft.

Isn’t it time you too had your very own public death in the near future?