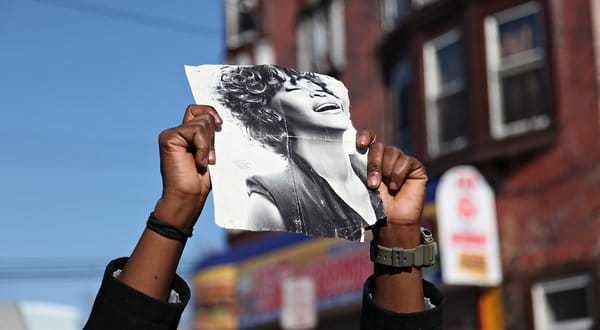 It seems almost if a national outpouring of grief has climaxed with the passing of adulated singer Whitney Houston with reports that onlookers outside of  New Baptist church took to dancing on the streets and setting off flying balloons.

capitalfm.co.ke: The streets immediately surrounding the red brick church were largely quiet Saturday after police blocked them off, but a crowd of hundreds of well-wishers formed beyond the barriers and the rows of TV cameras as a star-studded service took place inside.

A Philadelphia man brought a large drawing of Houston that he asked people attending the funeral to sign.

“She would not have wanted us to be sad,” one spectator who identified herself as Cynthia told AFP. “We are mourning, but it is a celebration. It is a party to say ‘We love you.’”

With up to 1500 mourners inside church with guests that included Hollywood luminaries such civil rights leader Jesse Jackson, Motown legend Stevie Wonder, Grammy winner Alicia Keys, Houston’s “Bodyguard” costar Kevin Costner, and her cousin, singer Dionne Warwick, onlookers were resolved to let the world know that as much as she was part of Hollywood she would always be their fallen idol.

One can only imagine what Whitney Houston might have felt had she been alive to see the jubilation and adulation before her, in fact it might have been enough to have given her the strength to have continued, but then that may well be the  ultimate irony of the suddenly re avowed singer. How bitter life can be….

As Whitney once reflected music and love are the same thing….