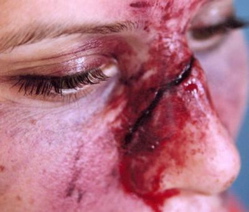 Trying to end the year on a memorable low.

As is customary at this time of year we look for our celebrities to self degenerate to new lows now that we have plenty of free time on our hands to discredit them and opine how vulgar they really are and how if they really were in love they wouldn’t be beating the crap out of each other in public and so forth.

With Chris Brown and Rihanna having their juicy acrimonious split earlier this year, followed by Madonna and Guy Ritchie and then of course the unbearable visage of coke whore Lilo capitulating when her girlfriend Samantha Ronson stood up for herself and said no more. Bringing up the Christmas festivities were Charlie Sheen and Brooke Mueller. That said we’ve set our sights on which couple we might expect to have a public brawl/beating before the new year is out. In no particular order,

1/ The wonderful Salahi couple who crashed the recent state dinner reception would be a fun choice, but if it were to happen we would hope they would have the decency to do it in Hawaii where the Obama’s are currently vacationing.

2/ Bradd Pitt and Angelina Jolie. But our gut guess is that would only make one person happy- Jennifer Anniston.

3/ Lindsay Lohan and who ever she’s currently mauling.

5/ Sienna Miller and Jude Law. We suggest a minor squabble about infidelity might just do the trick.

7/ Jon Gosselin and Hailey Glassman because love doesn’t mean much until you are shredding at each other in public.

8/ Marc Jacobs and his lover- because seeing two hot guys in g strings going for it always makes for an interesting spectacle.

9/ Ashton Kutcher and Demi Moore because we can’t seriously believe these two are so in love- blah!

10/ Just for good time sakes- Charlie Sheen and Brooke Mueller because a wife beating means so much more when it happens on Christmas day and new years eve.