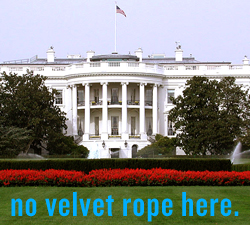 It must be reaffirming for Obama to know that a random couple can crash a high profile event, in his own home, where his wife sleeps, where his children come and play with their toys.  It may be wise to begin speculating about a mole in the Obama administration. Hopefully the president doesn’t have an older brother, who was stepped over for the highest of powers.

“Producers for Bravo, the cable channel, have been following and filming the couple this fall. The channel confirmed that Michaele Salahi was being seriously considered for the coming series “The Real Housewives of D.C.” – NY Times

Just when America couldn’t wait for another round of Desperate Housewives to pop up on Bravo, they go a pull a stunt like this.  This may single-handedly jeopardize the entire franchise.  What group of over-the-hill, pretentious, plastic women are we supposed to spend our evenings numbing our minds with now? Bravo, Bravo!

Perhaps the White House can finally put a law into place preventing the production of these unsightly reality shows, bringing matters back to status quo, where aspiring television stars go about their career paths the right way.  Move out to Los Angeles, get rejected countless times, lower their self esteem to where they can be taken full advantage of, and finally find solace in the respected world of pornography.

Secret Service spokesman Jim Mackin says the agency is moving closer to beginning a criminal investigation. He says that’s one reason the Secret Service hasn’t yet explained what happened when Michaele and Tareq Salahi arrived at the security checkpoint Tuesday for the dinner honoring Indian Prime Minister Manmohan Singh.