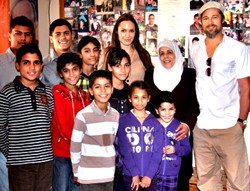 Angelina Jolie’s noble actions of helping the orphans worldwide is admirable, but now it just seems like she’s picking up children in an attempt to start a collection of memorabilia from each country she visits. After a recent trip to Amman, Jordan with Brad Pitt, gossip and speculation was fueled that they were going to adopt yet another child. The tabloids, however, were one step behind her — six steps to be exact. According to reports by The Enquirer, her trip was to visit the seven orphans (three girls and four boys) at the SOS Village orphanage that she has been supporting as her own for approximately six years. An insider reveals, “Angelina considers the orphans as her own family. She stays in touch with them and really cares about how they are doing. That’s why she was so excited about taking Brad to see them. They both feel this is a way they can help so many more children.”

SOS Village orphanage was brought to Jolie’s attention by an ambassador for the charity: the Queen of Jordan Noor Al Hussein. Unfortunately for her, the orphanage does not offer children up for adoption, which is the reasoning behind them not being draped all over Jolie’s body like an accessory. Her financial aid provides them with food, clothing, education, and other expenses. An employee named Aysha Shahin states, “Angelina will definitely support us by visiting again, by marketing us to other people and sponsoring a house which will pay the children’s expenses. She IS a sweetheart, and one of our greatest supporters.” Well, that just makes her sound like a bank.

This makes her clan comes to a whopping number of 14 kids — what? Did Octo-mom challenge her to a child hoarding contest? Although it is a generous gesture to supply these children with necessities, maybe she should first focus on being a good mom to the ones that she’s already got. There are tons of other celebrities and non-celebrities who will have the same heart as her, and if she spends all her time trying to be Mother Teresa to the underprivileged orphans in the world, the privileged ones that she has now back home are going to start feeling neglected.