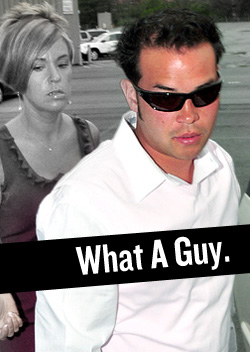 Observations of a professional media whore.

This week NY Magazine sets out on the dubious and terrifying task of humanizing one of the world’s most conspicuous media whores- Jon Gosselin. In the write up, the author Jay Bulger sets about following the man as he seeks to figure out how to legitimately capitalize on his illegitimate fame.

“As long as they’re snapping, I’ll keep smiling,” he says. “I didn’t win the Nobel Prize. I’m not an actor. I can’t sing. I can’t dance. I’m just a country boy with eight kids … I don’t really get it either.”
As one reads on and realizes that Gosselin is just as clueless as us as to how he became famous and rich, one senses that Gosselin is very aware that his time in the spotlight could abruptly end at any moment.To that end, the media whore is always swimming towards the biggest shutter bug that exists on the street.
Says the magazine vendor that Gosselin frequents on a daily basis-
“No cover today, but you’re inside all of them!” the magazine vendor says to Gosselin, handing him a copy of Star.
At the same time Gosselin who can’t quite believe his luck and misfortune of becoming a walking photogenic ‘basket case’ is prone to seeing his therapist on a daily basis because as he tells us-
“I don’t think it’s hit me yet … with everything that’s going on … I’m just trying to surround myself with morally strong people who can help me to be a better person.”
That said, we follow Gosselin with author in tow as they try to invade a perplexed Senator Mark Warner’s fundraiser. The senator of course does not budge and give Gosselin the media stage that he so ‘morally’ desires and is left to be a sort bemusement of a spectacle of himself.
In the end, one gets the feeling that Gosselin’s time in the limelight is drawing to a close because as even the man himself admits he doesn’t understand why he’s famous- except for the fact he is ‘media famous.’ In the interim, one hopes his ‘daily’ therapy sessions work out because the moral vacuum left in this man’s public branding and perverse existence as a ‘fluffy fish’ in a fragile fish bowl are more than likely to eventually subside.
After all, don’t fish die if you don’t keep the water fresh and circulating?
Prince Of The Professional Nobodies – NY Magazine
SHARE
Facebook
Twitter