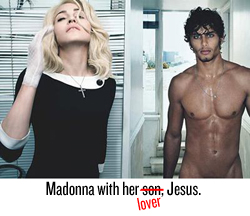 Madonna offers to let women the world know what they never dared to think until she turned up.

Madonna had just celebrated her 51st birthday but given her recent spate of plastic surgery (yes kids it’s true good looks can only last so long before the magic man needs to step in…) and impressive (compulsive) exercise regime could be easily forgiven to look like a woman 15 years her junior. Despite the visible discomfort plastic surgery has caused ‘Madge,’ she likes to work hard to attain the forever youthful image because she has worked out the secret to permanent record sales.

Permanent record sales only come if you look as young or as close to a teenager as possible and since the public is just as consumed as Madge is to image and youth then she is emboldened to offer the public what they demand.

That perhaps is why Madge (who tried to be British for a while but failed miserably…) recently explained, while being interviewed by Ryan Seacrest on radio, that there’s a really good reason why she doesn’t date guys her age.

And the answer is because they are fat, balding and grumpy.

This of course begs us to wonder what most women Madonna’s age look like.

OF COURSE, Madonna is not your typical 51 year old and since she has access to plastic surgeons, a very healthy bank account, personal trainers and the best publicists money can buy Madonna needn’t worry about most people’s reality.

That said, for a woman who gets to date 22 year old models (Jesus de Souza- pronounced, hay- zooz ) Madonna can get her way. But for most women, the score is if you want some love, then be prepared for the bulge, the grump and the bald spot!

The moral of the story, Madonna is probably not the best example of your twenty first century emancipated woman but as long as the plastic surgeon is in the house we’ll have a look…

Madonna on dating: men my age are grumpy, fat & balding

Who can we trust to succeed Larry King as the king of Media Drivel in the event he retires?

Nicole Kidman looks nearly like herself in reality and other faux pas.