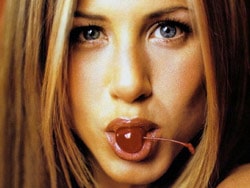 Who should Jennifer Aniston be dating next?

We’ve been wondering lately like you why media bitch/ omnipresent cover girl and b grade actress Jennifer Aniston hasn’t been lucky in love. With a string of unsuccessful relationships with Hollywood notables- Vince Vaughn, Paul Sculfor and John Mayer since Brad got up and left her back in 2005 Jennifer has been forced to endure a public lynching as to why she just can’t find a guy that wants to stick around.

That said we decided to sit down amongst ourselves and come up with a list of eligible bachelors that Jen should be hungrily getting on the phone to reach out to.

1/ Kristian Laliberte. Even though Kristian is technically gay and sort of married to our pal Social Life Editor – Devorah Rose we think Jen in time could come to excuse Kristian’s excesses and be smitten with some New England charm. We know we always are (we always love you Kristian- you are always a good sport…)

2/ Hulk Hogan. At first this is not an obvious choice but kids this man has ‘tele-genic’ presence (and you know Jen loves men with ‘tele-genic’aura) and he’s very strong – notice his big biceps we did!

3/ Ernie Anastos – TV news anchor. We heard through the grapevine that Ernie likes to use foul language but maybe that’s the kicker ?

4/ Adrien Field– gourmet star fashion editor- We think Adrien and Jen could spend the rest of their lives going to salons and handbag stores and being eternally in bliss.

5/ Jon Gosselin. The guy is cute, has his own reality show and is the current playboy du jour, never mind the nervous wreck called his soon to be ex-wife Kate Gosselin.

6/ Just for a change the Ecuadorian  guy who works at the Laundromat.  An unlikely match on paper but a sizzler in bed.

7/ John Edwards– the senator who specializes in affairs while his wife is in cancer and has out of wedlock children behind her back. Why only have drama on stage when you can have it behind stage too. And really kids- John is cute in a very senator kind of way.

8/ Activist and public nuisance Michael Moore. We think this could be a fun hot date. Sure Michael will have to lose the pounds but that never stopped Jen from going out with Vince Vaughn.

9/ Todd Palin. Wow! That’s a hot relationship just waiting to happen. Once Sarah finally dumps his ass the two of them can get together go deer hunting and looking out the window for Russia and talk about how they each got dumped.

10/ An unemployed male actor. Yummy, we think this is really the obvious choice. With all her money and experience Jen can really be there for some hot 24 year old straight out of Stella Adler currently pouring you a glass of vodka at some party. Jen don’t let this guy pass you up – he could just love you in a way that you could never have imagined or ever understood.