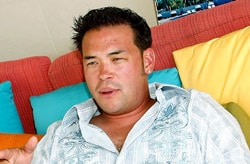 In some strange way Jon Gosselin’s wet dream may be coming true. The one half star of ‘Jon and Kate Plus 8’ who makes circa $75 000 per episode being a real life confused idiot(we wonder in the current economic climate if the producers could find a pseudo John Gosselin for say $75 per episode?) is really having the time of his life or to be precise the wet dream of his life.

Before he became a national fiasco Gosselin was a confused broke idiot married to a married equally confused woman (Kate) with 8 children. After the show began playing and the money and the national exposure kicked in Jon found himself a rich confused idiot. Not happy with Kate and who knows what else John decided that with his new found wealth he should now become a confused rich idiot who now gets to date college girls with perky titties.

And luckily for John his plan and wet dream have begun to work out, never mind that his credibility and general likeability factor have gone down the drain (but who doesn’t like a public figure to hate and drool over- not Jon, especially if he keeps getting paid for the inconvenience of being hated).

According to the Daily News (the NY Post equivalent of salacious trash with a modicum of restraint) Jon is really living it up with his wet dream stage hand- Hailey Glassman. Seen strutting around New York City, making do at fancy high end restaurants and parking his ass in a nice Manhattan apartment (and paid parking space too!). Of course the wet dream continues without having to make a contribution to the 8 kids, that role has been left for Kate (frumpy soon to be ex wife) to make do with her $75 000.

The moral of the story? If you’re an idiot you’ll always be one whether you are rich or poor.

Jon Gosselin’s expenses reportedly include Manhattan apartment, garage and Hailey – but not the kids