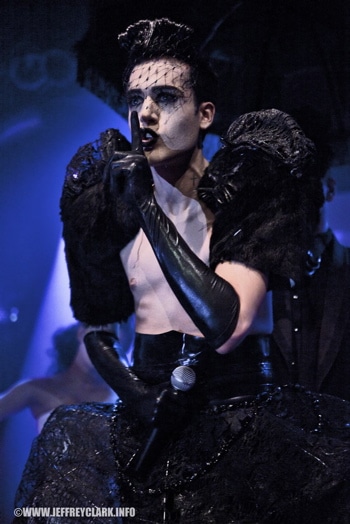 Next on the raider at number 7– Glam goth singer fashion icon: Kayvon Zand .

Kids, Kayvon Zand is the real shit. If you’ve ever wondered what a starving child neglected and unloved by his home country of Iran could ever amount to- he’s staring you back in your face.

Known to offend record producers, stage managers, editors at page 6 and parents in Greenwich – CT, and the general civilian population of NYC when he’s trolling the sidewalks which he uses as his personal runway – Kayvon in our opinion is the legitimate love child of Marilyn Manson meets Elvis Presely on a hungover Sunday morning.

Known for his mesmerizing ouevre this former male model (yes look deeply into his eyelids and you will melt and look for a thick 7 inch boot to lick – which Kayvon will gladly provide you with from his Murray Hill rent controlled man cave) Kayvon has been hitting the scene hard and causing young troubled teenagers to part with their money in the hopes of wishing they too could be like this fantastic glam artist who in his own words lives and breathes not just the way you see him on stage – but also off stage too. Never mind that sometimes the homebodies complain about him at the building lobby. Yes I know Kayvon dear, they’re just jealous…..

Welcome to the controversial life of Kayvon Zand.