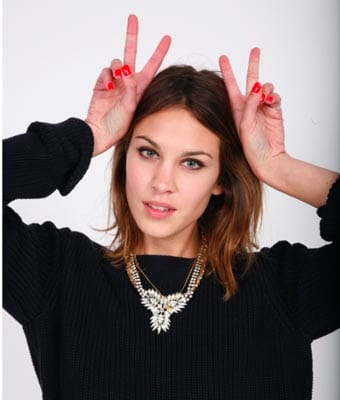 At number 3 we have media whore lite and hipper than thou could ever wish to be dog- Alexa Chung. A loud round of applause for this hawt bitch. Enough- put away the polaroid – your hurting Alexa’s eyes.

Alexa Chung, barely a syllable in our daily lexicon has in the space of a decade and a few fashion covers propelled herself from fame wannabe to fame fashion whore enigma- quite an accomplishment these days. So famous and desirable is she that fashion designers the world over like to brainstorm new ideas for her so as to take advantage of her booming hype reputation:

wikipedia : Chung is a muse to many fashion designers because of her distinctive personal style. She frequently appears on best dressed lists, is a regular cover girl for Vogue, Elle and Harper’s Bazaar and is often seen in the front row at fashion shows.

In 2009, the designer handbag company Mulberry created a much sought-after bag named after and inspired by Chung, called the “Alexa”.[24]

In February 2010, Chung collaborated with J.Crew‘s Madewell on a womenswear line which was unveiled during New York Fashion Week.[25]

Vogue’s Anna Wintour has described Chung as “a phenomenon”[26] while the New York Times has declared her “the Kate Moss of the new generation”.[3] Chanel designer Karl Lagerfeld has described her as “beautiful and clever..a modern girl”.[27]

Bitches are you gushing!! And just in case you think this femme fatale/model/tv presenter/personality(is that debatable?) /author/ visionary/fame whore is just sitting home doing sit ups in anticipation of the upcoming NY collections- she’s already strutting her proverbial ass over there with a bunch of Frenchies in Paris.

okmag : LEXA Chung has got the OK! girls going “ooo” and “aahh” this afternoon over her outfit at Paris Fashion Week 2011.