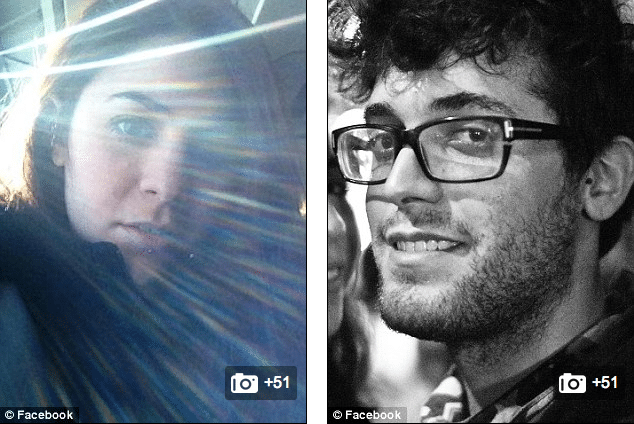 Update: Juliana as of Thursday lunchtime is out on $1500 bail. It is believed her daddy posted.

Juliana Luchkiw, one of the three indicted individuals pursuant to a drug raid at 302 Mott st, NYC in relation to the recent heroin overdose death of Philip Seymour Hoffman has told the court that ‘she is not a drug dealer but a student.’

The claim came yesterday in court, after along with her druggie boyfriend, DJ Max Rosenblum and veteran ‘down on his luck’ musician Robert Vineberg, the trio were indicted for possession and intent to deal.

Screamed the 22 year old Luchkiw, the daughter of a well to do NJ family: ‘Why is this happening. I can’t spend another night in here,’ after being denied bail.

Rosenblum and Parsons art student Juliana Luchkiw, both 22, had been charged with misdemeanor possession after cops found the hapless pair to be in possession of two bags of cocaine.

Although only Vineberg would go on to be charged with the more serious charge of felony possession (he was found with 350 bags of heroin in his possession), Juliana Luchkiw and her raggedy DJ boyfriend had caused enough consternation that authorities sought to further retain the trio.

Asked why the privileged daughter of a prominent NJ lawyer, Michael Luchkiw of the law firm, Decotiis FitzPatrick Cole & Wisler, could not get out on bail, Manhattan Criminal Court Judge Felicia Maddin ruled that the aspiring dramatist (indeed…) couldn’t hear bail applications because the case was indicted and was now the jurisdiction of Manhattan Supreme Court.

Charges would go on to be dropped against a fourth person, Thomas Cushman 48, who was arrested at a third apartment during the raid Monday night.

According to the New York Daily News he was the only one arrested who didn’t live there.

‘I was visiting,‘ he said. He reportedly was sporting a black eye he blamed on police. ‘I had nothing to do with it.’

Turano along with the other Rosenblum and Vineberg’s lawyers rigorously denied any wrongdoing and responsibility for actor Philip Seymour Hoffman’s overdose death.

Vineberg’s lawyer, Edward Kratt went even further to suggest that his client was being used as a scapegoat.

Told Kratt: This case and the charges against Mr. Vineberg have absolutely nothing to do with the death of Philip Seymour Hoffman. … We’re hoping the (district attorney) will not use Mr. Vineberg as a scapegoat.’

Rosenblum’s lawyer, Daniel Hochheiser, said his client ‘has nothing to do with Philip Seymour Hoffman.’

Luchkiw and Rosenbaum had two bags of cocaine, while investigators found about 300 packets of heroin, a bag of cocaine and about $1,200 in cash in Vineberg’s apartment, according to criminal complaints.

Of note is why authorities have chosen to indict the trio and whether the media’s rampant interest in the high octane death of a popular celebrity has compelled the city to pursue tough legal measures. Nevertheless, bad behavior aside, one has to wonder about the legality and merit of holding accountable a drug user’s supplier for their decision to consume drugs that they ought to know come at one’s own significant peril.

A 1972 state appellate division case found a dealer can’t be found guilty of manslaughter or criminally negligent homicide for selling heroin and syringes to a customer who later dies because, the court ruled, legislation enhancing punishment for drug crimes didn’t redefine homicide to include the sale of an illicit drug that results in death.

And holding a drug dealer criminally liable for a customer’s overdose death could prove difficult for the district attorney’s office, offered James Cohen, a Fordham University School of Law professor who runs a clinic that represents federal criminal defendants.

‘It’s not just enough that you know, if you will, theoretically or academically, that heroin could kill.’ he said.