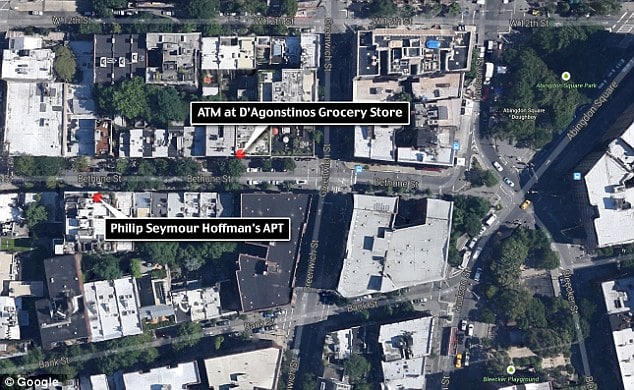 Cops have revealed that Philip Seymour Hoffman withdrew $1200 on the night preceding his death from a local D’Agostino grocery store.

The withdrawal, between 8 and 9pm came to happen minutes a block away from his $10K a month West Village apartment and is believed to have funded the acquisition of heroin that the actor would come to overdose on.

Told a law enforcement source via the nypost: ‘He withdrew cash from the ATM at the grocery store. Bank records show this.’

The source went on to disclose that there were no surveillance cameras at the ATM at the D’Agostino at 790 Greenwich St. at Bethune Street – where Hoffman lived – and no witnesses came forward to say whether Hoffman was alone or with others when he made the withdrawals.

In other reports, the UK’s dailymail tells that cops are reviewing surveillance tape from the local convenience store in which the actor came to withdraw $1,200 in six separate transactions.

A witness has since validated at the time of the withdrawals, the actor was always with two men wearing messenger bags.

Sources with law enforcement revealed that no cash was found inside Hoffman’s apartment on the Sunday he was found dead surrounded by 70 bags of heroin and 20 used syringes.

Cops tell that they are working to identify who sold Hoffman the fatal dose of heroin and where and when the purchase was made.

In their searching of the actor’s premises, they came to find 50 full glassine envelopes of the narcotic – branded “Ace of Spades” and “Ace of Hearts” – along with 20 empty bags when they found the Oscar-winning actor’s body, with a needle still stuck in his arm.

They also found 20 used syringes, a bag of fresh syringes and a charred spoon in which he likely cooked up his final fix.

‘He was apparently in the throes of a major heroin addiction,’ reiterated the source.

How prevalent the actor’s addiction came to be was not understood until now, given the admission from family insiders that the much loved actor had been recently asked to remove himself from the nearby family home after repeated episodes of getting high in front of his and girlfriend Mimi O’Donnell’s three children.

At the time O’Donnell feared for their sake and had asked the unrepentant actor to get his act together. Rather than putting an end to his habit, his moving to a nearby apartment on his own only escalated the actor’s already rampant drug use.

In fact so prevalent had the actor’s heroin use by now become it had become an open secret by some that the actor was in deep trouble. One commentator on the web even wondered how long it would be before the actor would kill himself. This a week literally before the actor overdosed.