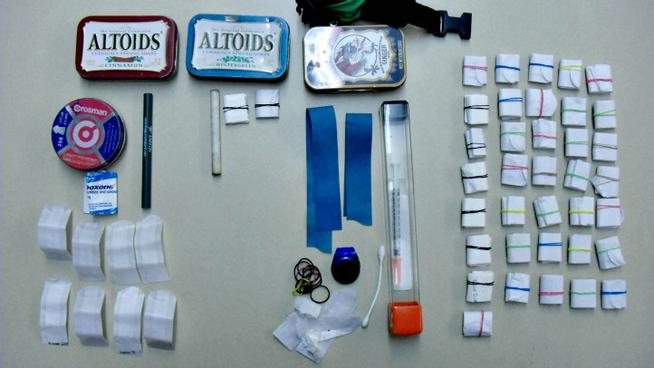 Cops Tuesday evening busted four individuals in 3 different Mott St. apartments who they believe might have been suppliers of the heroin that killed Philip Seymour Hoffman

Told a source via cbc: Police searched three apartments at the Mott Street building. They arrested two men in one apartment where they found 50 bags of heroin, and arrested a man and woman in another where an unspecified number of bags of heroin were found.

In a third apartment in the building, police found 300 bags of heroin.

None of the bags of heroin police recovered had the “Ace of Spades” branding that was seen with the heroin found with Hoffman’s body.

According to tmz, cops obtained a search warrant on the back of an informant, themselves a regular user of heroin.

The user gave up names and addresses of two alleged drug dealers who may have been pushing same brand of heroin that took the actor’s life.

Tells tmz: We’re told the heroin user told cops he buys from the same dealer Hoffman frequented and sometimes saw Hoffman in the dealer’s apartment.  The informant says Hoffman would buy “bundles” of heroin at a time … twice a week.

Sources say the informant told cops … the alleged dealer — a musician for a famous rapper — would sometimes run out of his supply and use a secondary dealer, who sold “cheap s**t heroin” that was dangerous.  And the informant says … Hoffman would get the secondary supply.

It remained unknown late Tuesday whether the suspects were actually believed to be Hoffman’s drug dealers.

I’m very very sorry that this man’s addiction led to his death. It is a national social problem. But why is this a MAJOR headline for several days? Because he’s a celebrity? OD’s happen on a daily basis in big cities all over America. Where are the headlines for these wasted lives? And….. at the end of the day…. these people choose drugs over life. Yes, by all means arrest all those who profit from this kind of tragedy…but innocents die every day through no choice of their own and we don’t headline that either.

Can we get some arrests here in the Bay Area for the many others who’ve OD and died? I’m not saying this isn’t good news, but come on! Lots of brown and poor folks have OD and society and the police just turn a blind eye. Why not go after those guys?

I feel very conflicted about drug-related arrests. I don’t really think that dealers should be arrested simply for dealing..

If the stuff is impure, we should give the dealer(s) a reward – for taking out the garbage for us. We need more of this stuff on the streets. The faster the garbage dies off, the better society will be.

Big busts are rare and do make the news if the cops and the DA want the publicity. For the most part prisons are filled with low end drug related criminals while the big fish enjoy their money. That’s why the war on drugs can’t be won this way.

well, if heroin were legalized and sold as a prescription drug probably very few people would die because the product would be made cleanly. But we are a judgmental society that frowns upon weakness of any kind, thus we castigate the junkies as if they were the moral equivalent of pedophiles. That’s what needs to change.

Who cares if it is an ordinary taxpayer who idolize this “celebrity” is the one who died? Really, money is thicker than morality.