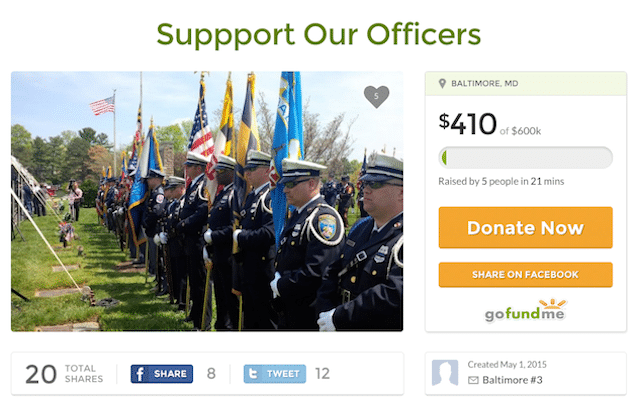 An effort to raise funds for the six indicted Baltimore cops in relation to the murder of Freddie Gray on behalf of the Baltimore Police Union has led to a gofundme page being shut down within 4o minutes.

According to a tweet posted by the union the collective told; ‘Apparently our Gofundme account has been suspended with no explanation. We are working to find a new site for donations. Thank you!

At the time of the account’s closure the fund had collected a measly $410 out of a suggested $600 000 allotment.

The Baltimore City Fraternal Order of Police, Lodge #3 has been overwhelmed with the enormous generosity of people from around the world. We have received many requests to open an online account that will accept monetary donations for the 6 officers who have been wrongly charged in the death of Freddie Gray. All monies collected will be used to assist our officers with their living expenses during their unpaid suspension. as well as to help defray their legal expenses.We thank you, in advance, for your continued support.

Apparently our GoFundMe account has been suspended with no explanation. We are working to find a new site for donations. Thank you!

The closure of the fund comes presumably because gofundme rules stipulate that funds can not be collected ‘in defense of formal charges or claims of heinous crimes, violent, hateful, sexual or discriminatory acts.’

Something that must have passed over the heads of the Baltimore Police Union who last week compared peaceful protesters to a ‘lynch mob.’

That though might pale in comparison to one Detroit prosecutor, Teana Walsh’s rant, which saw the legal services employee forced to resign today when she called for the shooting deaths of all anti cop protesters.

According to a report via gawker ‘The GoFundMe gimmick has become a standard move now for defenders of suddenly-famousbigots and killer cops who shoot unarmed black men.’

What do you think, will you be donating when the Baltimore Police Union comes calling at your doorstep…?

Freddie Gray broke his neck after cops made secret stop.