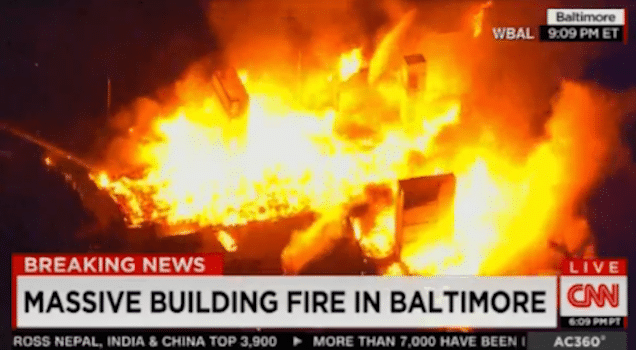 Hostility has erupted in the streets of Baltimore as protesters have reacted with venom after attending the funeral of Freddie Gray the African American 25 year old who came to die in police custody.

Along with the looting of  pharmacies, convenience stores, random cars torched and authority figures the focus of crowd anger some media outlets have indicated that protesters have earmarked anyone who is not African American.

“Very, very angry to see anybody driving in a rental car who was not African-American and very, very threatening to us.’

Hurt-punched in face and iphone stolen by a protester near burning car. Bystanders shielded me from more attacks…able to leave. @CBSNews — Steve Dorsey (@steve_dorsey) April 27, 2015

Leading into this afternoon’s funeral, tension had grown as high profile gangs – the Black Guerrilla Family, the Crips and the Bloods, openly entered into a partnership to take out law enforcement officers.’

Also a tweet had bounced around inner city high schools urging students to ‘purge’ at 3pm when school came out. This was a reference to a 2013 horror film about a 12-hour period of lawlessness.

As early evening arrived the crowds swelled as looters indiscriminately began torching automobiles as authority figures attempted to gain control. State police reinforcements have since been called in along with the National Guard.

As rioters continue to take matters into their own hands, authorities have yet to explain how or when Gray’s spine was injured which would ultimately lead to his death and the community calling foul.

Police acknowledged on Friday that Gray should have received medical attention on the spot where he was arrested – before he was put inside a police transport van handcuffed and without a seat belt, a violation of the police department’s policy.

A violation that broke the camel’s back as citizens of a predominantly African American community who have long weathered the waters of oppression violently reacted.

And then there were these sampling of comments I came across on the web that made me wonder. See what you think?

This has been building up for a long, long time in Baltimore and around the country. This is where it all ends up: decades of systemic inequality, bad policing, a war on drugs and a biased criminal justice system. I can’t believe I’m saying this, but I support the Koch brothers. They are absolutely right about racism, inequality, and criminal justice reform; we’ve screwed over generations of black folk. If I were a twenty something black male, I’d be raising hell tonight, too.

“I’m just a working class guy—a property manager. I have some properties on North Avenue. I did attend the demonstrations on Saturday, because I’ve been pulled over a few times, and the police treat me like shit every time I’m pulled over. But it shouldn’t be like this. All the right wingers—this is exactly what they want. Fox News, Breitbart. We look like hooligans.”

Sadly – I suspect it’s not far fetched to picture a room in the White House full of political hacks who are rubbing their hands together in glee over this — because they want as much violence and discord as possible to motivate their voting base who would otherwise stay home in 2016.

Through the years, too many black people continue to show an inability to function and prosper in a culture unsuited to them. Detroit is bankrupt, the south side of Chicago is a war zone, and the vast majority of black cities all over America are beset by degeneracy and violence. And blacks never take responsibility for their failures. Instead, they lash out in anger and resentment.

Across the generations and across the country, as we have seen in Detroit, Watts, Newark, Los Angeles, Cincinnati, and now Ferguson, rioting and looting are just one racial incident away. The white elite would tell us that this doesn’t mean the experiment has failed. We just have to try harder. We need more money, more time, more understanding, more programs, and more opportunities. But nothing changes no matter how much money is spent, no matter how many laws are passed, no matter how many black geniuses are portrayed on TV, and no matter who is president.

Some argue it’s a problem of “culture,” as if culture creates people’s behavior instead of the other way around. Others blame “white privilege.” But since 1965, when the elites opened America’s doors to the Third World, immigrants from Asia and India–people who are not white, not rich, and not “connected”–have quietly succeeded. While the children of these people are winning spelling bees and getting top scores on the SAT, black “youths” are committing half the country’s violent crime–crime, which includes viciously punching random white people on the street for the thrill of it that has nothing to do with poverty.

The experiment has failed. Not because of culture, or white privilege, or racism. The fundamental problem is that white people and black people are different. They differ intellectually and temperamentally. These differences result in permanent social incompatibility.